POEM is a Pressure Operated Electronic Meter, with no moving parts, developed for gauging flooded rivers with flow rates up to 10 m/sec.

Patented in the United States, New Zealand and Australia, the POEM 1000 represents a totally new product designed for use by hydrologists, engineers and scientists.

The POEM 1000 consists of a forward-facing Pitot tube with solid-state velocity and depth sensors housed inside a weighted body. Sampling is rapid enough to measure flow turbulence. The bronze, streamlined body is robust and has no moving parts. Problems encountered using conventional gauging methods are largely eliminated using this technology.

Conventional flood gauging utilises a weighted, rotating element current meter suspended at fixed depths at intervals across a river. Current speed is calculated from the number of meter revolutions per second and depth is measured by the length and angle of cable wound out. This technique has several disadvantages:

The POEM 1000 overcomes these problems by utilising an electronic Pitot tube and hydrostatic depth detection. Data are collected and recorded electronically at a rapid rate (typically 28 Hz) so that flow turbulence is resolved.

For river gauging the POEM is usually lowered to the riverbed and raised so that a vertical profile of the streamwise component of velocity is recorded. The exercise is then repeated several times across a river to build up a series of vertical profiles. This technique gives a significant increase in overall gauging accuracy, decreases gauging times and increases the resolution of information about the streamwise component of velocities at a measured cross-section.

Depth and velocity information is continuously transmitted to the operator via standard gauging equipment. The data are decoded and buffered by the POEM 1000 Interface, ready for RS232 transmission to a PC or datalogger. The user-friendly software enables velocity and depth data to be graphically presented in real time and stored ready for analysis or discharge calculation.

The POEM 1000 is in use New Zealand-wide, where is it has been found to be ideal for the fast-flowing steep rivers. Data collected by the POEM have been used to show velocity contours, turbulence intensity, bed shear stress and local flow resistance coefficients for several New Zealand rivers. The instrument has also been independently tested overseas with excellent results. 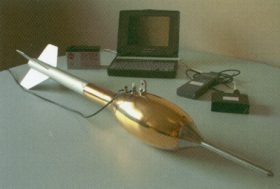