There are two species of kōura or freshwater crayfish in Aotearoa.

Kōura are a valued mahinga kai species and considered a delicacy by Māori. In the past they were a staple food item, and prized in some areas for their use as a bartering tool. The Te Arawa and Taupō lakes were considered the most productive kōura fisheries in New Zealand. In the past, the kōura fishery was actively managed by a combination of rāhui (where all fishing was halted in a particular area for a specified period of time, or where limits were placed on the use of particular methods) and ownership rights (based on ancestral fishing grounds). Occasional releases of kōura were made into waterways to boost populations and selective harvesting (e.g., return of gravid females to the lake) ensured the long term viability of the populations.

Kōura are found in native forest, exotic forest, and pastoral waterways, but very rarely in urban streams because of chemical pollution, increased flood flows from stormwater inputs, and degradation of habitat. Kōura densities can be lower in pasture streams compared to native forest streams. Kōura tend to live longer in native forest streams because of cooler water, but grow faster in pasture streams with warmer water temperatures and more abundant invertebrate food.

Kōura survival can be affected by high water temperatures, particularly for the southern species, P. zealandicus, where survival in laboratory experiments decreased as constant water temperatures exceeded 16ºC, with 50% survival at 21ºC after 12 weeks. The northern species, P. planifrons, can tolerate higher temperatures, but optimum temperatures are likely to be less than 23ºC. Kōura are rare in low calcium waters such as Lake Tikitapu, and kōura (P. zealandicus) survival in laboratory tests increased with water calcium concentrations above 10 mg/L. Kōura in lakes can be affected by periods of anoxia, e.g., they are now absent from Lake Okaro as this lake has no oxygen in its bottom waters during summer. Kōura may also be affected by pollutants such as heavy metals or by toxins from cyanobacterial blooms.

Habitat cover (e.g., large wood, undercut banks, cobbles, and boulders) is extremely important as it provides shelter from predation and cannibalism. Kōura prefer pools and areas of slow or no flow. Deep habitat (pools in streams) may act as a refuge from terrestrial predators and collect leaves and other foods. At times of heavy flooding, forested streams with stable habitat from riparian vegetation (e.g., stable banks, tree roots, and pools) provide a better refuge for kōura populations than pasture streams dominated by unstable cover items such as cobbles and macrophytes.

Crayfish are vulnerable to predation from introduced species that they have not evolved with (e.g., trout, catfish, and perch). Kōura make up a large proportion of catfish diet in Lake Taupō (up to 80% in some areas). Anecdotally, the introduction of perch to a Northland lake has dramatically decreased crayfish populations. In some South Island streams, brown trout were the main factor affecting kōura abundance, particularly for kōura sized 7-20 mm. 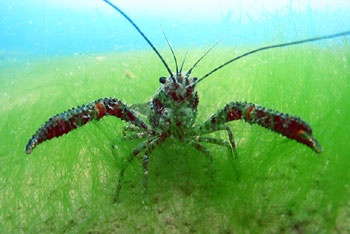