Banded kōkopu juveniles are very good climbers and will try to escape from buckets by clinging to and wriggling up the sides.

Banded kōkopu are the second most important whitebait species and occur at mid to high altitudes in Aotearoa streams. Adult fish have thin stripes or bands across their backs, explaining why they are called banded kōkopu. These fish prefer to reside in waterways with lots of shade provided by overhanging vegetation such as trees and grasses. As with giant kōkopu, banded kōkopu are usually found in pools or under undercut banks.

Juvenile banded kōkopu (along with kōaro) are able to climb the near vertical rock faces of falls so long as a film of water wets the rock surface. Unlike īnanga, which has no climbing ability, banded kōkopu can penetrate well inland to small first order streams, some of which may be above falls as high as 20 m.

Studies conducted on juvenile banded kōkopu show that young fish are attracted to the odor of adult fish, implying that they can sniff out good habitat based on the presence of adult fish. They feed on insects at night (especially those that drop into pools), which they detect by their vibrations.

In addition to being an important component of the seasonal whitebait fishery, adult kōkopu were also taken at night (when they are most active) by Māori using a torch and a scoop net. The fish are relatively easy to capture as they are slow moving unless frightened.

Loss of forest cover (and replacement by pasture) has been a major factor responsible for the decline of whitebait species other than īnanga.

Banded kōkopu prefer stream temperatures of 12-18°C. When dissolved oxygen levels in the water decrease, it is likely that juvenile banded kōkopu will leave the water body if possible in search of a more ideal habitat.

Natural pollutants such as ammonia, which occurs in livestock waste and poorly treated wastewater, can adversely affect fish populations through displacement and, at high concentrations, death. In laboratory experiments banded kōkopu were found to be the second most sensitive species to ammonia toxicity. As with giant kōkopu, these fish have a preference for slightly acidic waters with a pH of <6.5. This explains why this species can be found in brown peat-stained waters.

Of six juvenile native fish species tested, banded kōkopu were found to be the most sensitive species to suspended sediment, showing strong avoidance. However, when suspended sediment was mixed with adult odours the level of avoidance decreased. They are less abundant in turbid rivers than in clear rivers, confirming the effect of turbidity on adult stocks.

The climbing whitebait species, including banded kōkopu, cannot climb the dry walls of dams and in places have been adversely affected by dams which now prevent migrations to and from the sea. 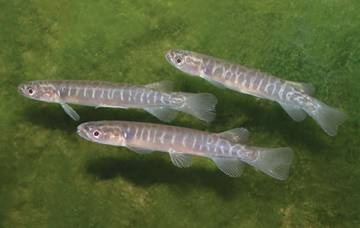