The Galaxiidae family is the largest family of freshwater fishes in New Zealand; there are about 26 species present here which have been divided into two genera, the galaxiids (Galaxias spp.) and the mudfish (Neochanna spp.). Galaxiidae occur throughout the southern hemisphere - in New Zealand, Australia, South Africa, Chile, and Argentina. The family contains some species that are widespread and familiar to most New Zealanders, e.g. the 5 whitebait species, but other species are less well known with very restricted distributions, e.g. Eldons galaxias.

Galaxiidae come in many shapes and sizes, but most species rarely exceed 150 mm in length. However, the giant kokopu can grow to over 400 mm in length and 1 kg in weight. Different species have adopted different life cycle strategies; five species are diadromous and usually must go to the sea. This group of species is commonly known as whitebait. Other species are non-diadromous and live their whole lives in fresh water. They are probably less familiar to the general public. Even less well known are the mudfish, a species that are able to aestivate during dry conditions and thus survive in ephemeral waterways.

It is thought that the non-diadromous species of Galaxiidae have evolved from the diadromous species, probably after geological events caused them to become land-locked. Gradually, these species have developed separate populations and distinguishing characteristics. In recent years, seven new galaxiid species have been described from the lower South Island and it now appears that even more new inland species are awaiting recognition. Previously these were thought to be the same species as the Canterbury galaxias. In addition, new mudfish species have been discovered on Chatham Island and in Northland. Although much taxonomic work remains to be done on this family, at present the Galaxiidae species that are found in New Zealand are:

Whitebaiter on the Mokau River

Four of the new Otago galaxiids 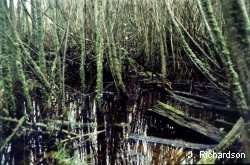 Telling the other species apart using a key is more difficult as it relies on very technical characteristics such as fin ray and vertebral counts, the length of the gill rakers, and whether teeth are present or not. Using the photographs and the distribution maps will at least narrow down your possibilities to just a few species. If you do want to try and count the caudal fin rays, a characteristic that distinguishs many of the non-diadromous galaxiids from one another, read the article by R.M. McDowall in Water & Atmosphere 4(3): 27 to be sure you are counting the rays correctly. If you are still unsure of the identification, seek assistance from an expert.