Freshwater eels occur in Europe, on the east coast of North America, and throughout the eastern Pacific and Indian Oceans. There are about 16 species in total. Most New Zealanders are familiar with this fish and know what eels look like. However, not everyone is aware that there are two distinct Anguillidae species native to this country, the longfin eel and the shortfin eel. A third eel species, the Australian longfin eel, has recently been discovered in the Waikato River, and may have colonised other river systems in New Zealand. The species found in New Zealand are: 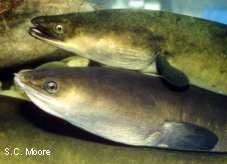 Eels have a fascinating life history. They breed hundreds of kilometres away from New Zealand, probably in deep ocean trenches somewhere near Tonga. The larvae are called leptocephalus and look nothing like an eel, being transparent, flat, and leaf-shaped. They reach New Zealand by drifting on ocean currents.

Before entering fresh water the leptocephalus change into the more familiar eel shape, although they remain transparent for up to a week after leaving the sea. These tiny “glass” eels enter fresh water between July and November each year, often in very large numbers. Eels take many years to grow and it could be decades before an individual is ready to undertake the long migration back to the tropics. The adults never return as they die after spawning.