Sea cucumbers are usually, well cucumber-shaped. However there are exceptions. Some have a wonderful collection of tentacles in odd-places, some are prickly, some look like a strawberry with tree-like tentacles, and some even resemble piglets!

This week’s critter Psolus antarcticus (Philippi, 1857), is one of those exceptions. The Psolidae are a curious group of Holothuroidea that are flattened and scaly and can clamp tightly down onto hard surfaces on the seafloor, resembling a limpet. 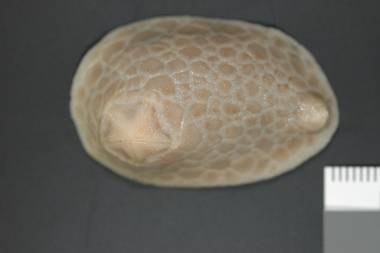 The top of the sea cucumber is made up of a mosaic of scaly overlapping plates and the five pointed star shaped plates visible in the image hide the opening where the animal extends its tentacles from to feed. This diagram from an old manuscript shows the tentacles extended.

A diagram of a Psolus specimen showing it with tentacles extended. [Original by Lindberg — The royal natural history Lydekker, Richard, 1849-1915. Licence in the public domain via Wikimedia Commons https://commons.wikimedia.org/wiki/File:Psolus.jpg#/media/File:Psolus.jpg]

If flipped over the gut of the sea cucumber is visible through a much thinner body wall on the bottom of the animal. You can also see a row of tiny circular tube feet around the  rim of the body, which help Psolus to move over the rocks and suction down tightly to the surface when disturbed. The underside of a specimen of Psolus antarcticus (Philippi, 1857) revealing a row of tiny circular tube feet. This specimen was from 1110 m on the Chatham Rise, New Zealand. [Peter Marriott, NIWA, Oceans Survey 20/20 Chatham-Challenger project]

The many homes of Psolus antarcticus

Despite its name, Psolus antarcticus is actually found around New Zealand, out on the Chatham Rise, on Macquarie Ridge, around Macquarie Island as well as in South Georgia and the Ross Sea, Antarctica.

Researchers at NIWA and the Museum of Victoria have published reviews and keys to the New Zealand and Australian species of Psolidae, including Psolus antarcticus, with colour photos of other species in the family. Follow the links below: