NIWA's Lauder facility has two Bruker FTIR spectrometers. These instruments remotely measure trace gases in the atmosphere. Lauder is also responsible for the operation of a third Bruker FTIR at Arrival Heights, Antarctica.

The Bruker 120HR is a Fourier Transform Infra-red Spectrometer (FTIR or FTS). It is a type of Michelson interferometer that uses absorption spectroscopy to remotely measure trace gases in the atmosphere.

Lauder's 120HR, made by Bruker Optik in Germany, and was purchased in 2000. It replaces an older and less precise 120M (mobile) version. The 120HR is a large instrument with heavy castings designed to remain stable even under vacuum.

In operation an image of the sun is precisely centred on the input of the instrument. Trace gases along the path from ground to space absorb light energy at known wavelengths. The instrument records thousands of absorptions over a wide range of frequencies enabling many gases to be measured at once. Switchable optical filters and beamsplitters allow the instrument to cover most known species.

An important characteristic of the 120HR is the extremely high resolution: up to 0.0035cm-1. This allows the retrieval of additional information such as height distribution (or profile).

The instrument is controlled using NIWA automation software. On most fine days it will run automatically from sun-up til sun-down with little manual intervention apart from filling the detectors with liquid nitrogen (they are cooled to -200 C to increase performance). Our 120HR is largely dedicated to measure in the mid-IR (MIR) where trace gases in the stratosphere and troposphere have useful absorption features.

For a period we also used the instrument to operate in the near-IR (NIR), measuring greenhouse gases (GHGs). However in 2009 a later model instrument (the Bruker 125HR) was purchased and is now dedicated to this job.

Measurements taken with the Bruker 120HR are submitted to a database coordinated by the Network for the Detection of Atmospheric Composition Change (NDACC). Our data are frequently used in papers published in many scientific journals.

Hydrogen chloride (HCl) is an important reservoir species for ozone-depleting chlorine (Cl). The plot to the right shows the raw absorption feature as measured by the instrument.

The next plot shows several years of analysed Lauder HCl measurements. Note the decrease shown in recent years as a result of reduced emissions of ozone depleting substances such as CFCs.

Lauder's 125HR was purchased in 2009 and is dedicated to measuring GHGs for the Total Carbon Column Observing Network (TCCON).

TCCON is a network of ground-based Fourier Transform Spectrometers which accurately measure column-averaged CO2, CH4, N2O, HF, CO, H2O, and HDO. The network provides an essential validation resource for the Orbiting Carbon Observatory (OCO) and GOSAT satellites. The global coverage of these measurements will characterise sources and sinks of greenhouse gases on regional scales and led to a better understanding of the carbon cycle and climate change.

Our 125HR is a significant improvement over the 120HR in terms of performance for the near infra-red (NIR) TCCON measurements. The 125HR is a large and very stable instrument. It weighs over 600kg and features modern digital processing electronics.

Room-temperature InGaAs and silicon detectors are used to detect the interference signals produced during the measurement process. This interferogram is later processed to derive the absorption spectra. Further detailed analysis of absorptions enables gas quantities to be determined to a remarkable 0.3% or better accuracy. This is about 10 times better than what most other remote sensing atmospheric measurement techniques can achieve.

The plot to the right shows the Keeling curve from Mauna Loa, with CO2 levels at 390ppm in 2012. Bruker 120HR Spectrometer (top) and inside the interferometer compartment (bottom) Bruker 120HR spectrometer. This plot shows several years of analysed Lauder HCl measurements. Note the decrease shown in recent years as a result of reduced emissions of ozone depleting substances such as CFCs.

The Bruker 125HR Spectrometer (top) and an inside view of our instrument (bottom). 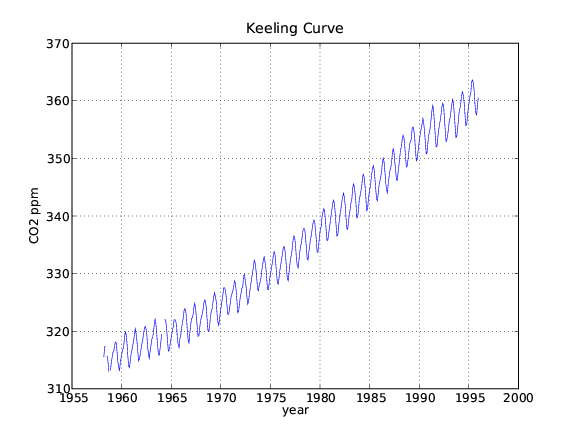 Bruker 125HR spectrometer. This plot shows the Keeling curve from Mauna Loa, with CO2 levels at 390ppm in 2012.