The life and death of planktonic foraminifera Helen Neil, Penny Cooke, and Lisa Northcote use present-day biology to reconstruct oceanic and climate change of the past. 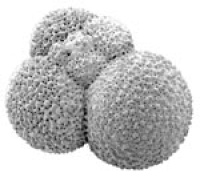 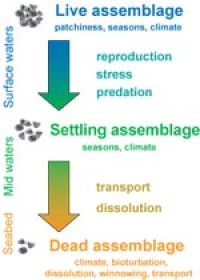 Occurrence and flux rates of dominant forams across the studied time frames.

Of all the marine organisms that produce calcium carbonate shells, planktonic foraminifera (or forams for short) account for about 20% of the estimated 5.8 billion tonnes of carbonate produced annually in the world’s oceans. Similar in size to sugar grains, these single-celled animals produce enough shells each year to fill Wellington’s Westpac Stadium (the ‘Cake Tin’) 1400 times over. Nearly 70% of the seafloor is covered by sediment made up from forams. The present-day abundance and distribution of species is related to oceanography and climate. Thus understanding the present-day patterns gives an insight into oceanic and climatic systems throughout earth’s history.

Factors influencing distribution vary and result in different assemblages (groups of individuals occurring together at one time and place). Oceanographic factors (temperature, salinity, layering, flow) and biological factors (nutrients, oxygen, light) control the abundance, size, and composition of populations. Bioturbation (biological activity on the seafloor that can mix fossils of different ages together) leads to a fossil assemblage representing time ranging from a few decades to hundreds or thousands of years.

We can study the living assemblages at different water depths using plankton tows. Assemblages settling through the water column can be collected in sediment traps, and foram shells that finally reach the seafloor can be sampled. A comparison of assemblages improves our understanding of the ecology and distribution of the modern populations. This informs our reconstructions of past ocean and climate changes – the study of palaeoceanography.

Forams of the subantarctic

We collected planktonic forams from the upper water column at two sites in the Southern Ocean over Campbell Plateau. Site 1 on Pukaki Rise at a water depth of 500 m is an area of weak current flow where surface waters in summer are stratified. During winter, the waters are weakly stratified with mixing to about 200 m. In contrast, Site 2, on the flank of Campbell Plateau at a water depth of 2500 m, lies within the strong flow of the Subantarctic Front, where mixing occurs to 400 m.

How many, where, and when?

Numerically, forams can be one of the most abundant zooplankton in the oceans, and are found in high numbers in productive areas where standing stocks (the number of organisms present in an area at a particular time) can be greater than 10 specimens per m3. We found the average standing stock on Pukaki Rise to be 15 individuals per m3. However, Pukaki Rise experiences a spring bloom (sudden and rapid multiplication of plankton) with 30 per m3 occuring at the start of the bloom and less than 1 per m3 after it. Over the flank of Campbell Plateau there is a standing stock of 8 per m3 and forams occur with great regularity during the year.

Using MOCNESS tows we sampled the distribution of planktonic forams in the water column. Across Pukaki Rise Gg. bulloides dominates in the summer tow, with the peak abundance occurring in the upper 150 m of the water column, or just below the seasonal thermocline (the layer in which water temperature decreases rapidly with increasing depth). During the winter tow Gt. inflata is dominant, with deeper mixing helpful to its reproductive cycle. Over Campbell Plateau flank Gg. bulloides peaks in summer below the chlorophyll maximum. A high abundance of Gt. inflata occurs as a result of the deeper mixing of water layers. The winter assemblage is dominated by Gt. truncatulinoides due to deep mixing and low temperature gradients.

If this is the pattern of production in surface waters, what do we find in the ocean-floor sediment samples? Sediments from Pukaki Rise represent about 200 years of accumulation. Here the small Gg. quinqueloba and Ng. pachyderma, which prefer little to no stratification, dominate the assemblage. On the Campbell Plateau flank, the assemblage has accumulated for over 500 years and is also dominated by the smaller forams.

MOCNESS tows represent ‘snapshots’ of the environment and its occupants. Tows collected forams over 4 km of ocean twice a year, whereas the sediment traps provided a year-long record. The assemblages recorded by the tows and sediment traps are similar, but the proportion of species abundance varies with the sampling schedule. Species occurring in the spring bloom on Pukaki Rise and Campbell Plateau flank are under-represented in the MOCNESS tow data.

Species that reproduce more often, are cold tolerant, and resist dissolving in seawater will have greater representation in the sediments. The record preserved in sediments commonly contains species that prefer little water stratification, suggesting that stratification seen today over Campbell Plateau was not as persistent over the past few millennia. This leads us to speculate on the cause of the differing stratification and the role that long-term climate oscillations such as the El Niño–Southern Oscillation and the Pacific Decadal Oscillation have on the oceanography and death assemblage recorded by foraminifera. 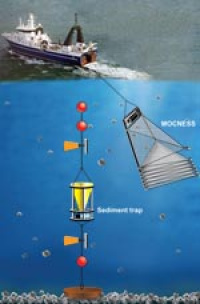 MOCNESS – Multiple Opening Closing Nekton Ecological Sampling System – is a vertical arrangement of fine-mesh nets towed behind a ship. The nets can be opened and closed at different depths, thus collecting the small plants (phytoplankton) and animals (zooplankton) that drift with the ocean’s currents within the water column. The quantity of organisms recovered divided by the volume of water towed through gives the standing stock, or biomass.

Sediment traps are conical or cylindrical collectors that catch sediments and detritus sinking from the surface to the deep sea. Sediment traps have subsurface floats and a bottom weight that rests on the seafloor. We recover the traps after several days or weeks. The quantity of material divided by the collection area and the time the traps were deployed gives the particle flux, or amount of sinking matter passing through a particular depth.

Dr Helen Neil and Lisa Northcote are with NIWA in Wellington. Helen’s work focuses on isotope geochemistry, palaeoceanography, and micropalaeontology. Lisa works in sediment analysis and micropalaeontology. Dr Penny Cooke is the Comer Foundation Postdoctoral Research Fellow at the Department of Earth Sciences, University of Waikato.

This work was funded by the FRST research programme ‘Consequences of Earth–Ocean Changes’ (C01X0203).

Teachers’ resource for NCEA AS: Biology 3.5; Science 2.5. See other curriculum connections at www.niwa.co.nz/pubs/wa/resources