Sean Hartery, a PhD student from Canterbury University based at NIWA, is collecting samples and data for two main areas of atmospheric research while he is out here in the Ross Sea: ice nuclei and aerosols.

In the first of these, Sean is helping two different research groups, one based in France and the other in the US, to investigate the presence and abundance of ice nuclei in the Ross Sea. Ice nuclei can be composed of particles of biological material such as bits of phytoplankton or zooplankton or anything extremely hydrophobic like soot (black carbon), that act as sites of contact freezing. Water droplets in the clouds will freeze when they contact these particles if the air temperature is low enough. These are what we see when snow falls.

The presence of ice nuclei may affect how clouds reflect solar radiation. By aiding the freezing process, ice nuclei can affect how quickly snow forms within clouds and, subsequently, the lifetime of the clouds themselves. If there were no ice nuclei then the water droplets in clouds wouldn’t freeze until they reached -30°C and for pure water they wouldn’t freeze until -37°C. In the Southern Ocean we usually see low-level strato-cumulus clouds and these are generally at a temperature 7-10 °C cooler than the air temperature we feel down on the ship.

The second area of research is for Sean’s PhD, in-situ measurements of aerosol in the Ross Sea. An aerosol is any bit of material in the atmosphere in solid or semi-liquid state. In general, seasalts are the larger size range of aerosols we find in the marine environment, in the smaller range they are condensed marine volatile gases, particularly Dimethyl sulphide - DMS. These devices are both used to collect ice nuclei samples from the air. The two tall probes on the green bin are called microvols, and the spacey silver dome is literally a serving bowl used as a rain and snow shelter for an ambient aerosol sampling device.
Sadie Mills, NIWA The same ice nuclei measuring devices in snow conditions. We wouldn’t get snow very often if there weren’t any ice nuclei to form the snowflakes on.
Sadie Mills, NIWA 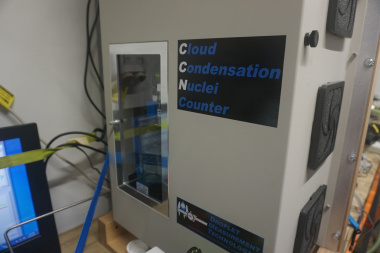 The Cloud Condensation Nuclei (CCN) Counter acts like a cloud. It draws in air from the pipe we pictured, through a column which is saturated with water vapour. Sean introduces a temperature gradient into the column so that the warm air at the top of the column increases the water vapour, and as the air cools lower in the column the water vapour condenses onto the particles in the column. The condensed water then passes through a laser. The laser determines the number and size of activated aerosols in the sample.
Sadie Mills, NIWA Sean’s aerosol pipe, drawing in air from the mast of Tangaroa up above the monkey island. The pipe is 40 m long and it takes the aerosol about 10 seconds to get from the mast down to the instruments in the shipping container labs down on the trawl deck.
Sadie Mills, NIWA

The CCN counter is constantly running. Sean can vary the temperature gradient in the column to find out the effect this has on different sized aerosols, helping determine which size (and hence type) of aerosols present in clouds are more likely to act as water droplets. The laser can measure aerosol droplets from 0.75-10 micron. Other instruments the Atmosphere team have in their lab can measure droplets as small as 10 nannometres up to 50 microns. Sean changing the deionized water in the CCN counter.