Instream structures such as hydroelectric dams may act as barriers to fish migration, and have the ability to alter the ecological connectivity of freshwater environments.

The need to provide upstream passage facilities for ensuring the long term sustainability of migratory freshwater fish populations is now well recognised. In contrast, constructing an effective barrier against pest fish, predators and/or competitors can support the development of more desirable fish populations upstream of the barrier.

Minimum flows that are released from dams are now routinely set as part of resource consents to ensure that habitat for resident fish populations are maintained below the dam, as well as providing passage for migratory fish. However, in order to ensure that upstream migrating fish are able to pass over the dam and utilise habitat upstream, the installation of passage facilities may be required.

Passage facilities should aim to permit passage for all upstream-migrating native fish that occur within a catchment, with the exception of those considered to be exotic pest fish (e.g., Koi carp, rudd, and in some instances trout) by DOC and those situations in which a conservation case can be made for not permitting access. Passage for those upstream-migrating fish who have historically been recorded in a catchment, and who could reasonably be expected to require passage, should also be catered for.

A variety of upstream passage facilities have been installed in New Zealand at large instream barriers. The following section briefly describes the four main types of facilities installed, namely:

The choice of facility installed depends upon the fish species requiring passage and the characteristics of the barrier, such as head height, available space and economic resources.

Fish ladders or ramps are the most common type of fish pass currently installed at hydroelectric facilities in New Zealand, and are often referred to as 'elver ladders', although they can provide passage for species other than elvers. These passes have been successful in assisting the upstream passage of elvers, common bullies, smelt, torrentfish, kōaro, banded kōkopu, īnanga and other galaxiids. They can also provide passage for invertebrates like freshwater shrimps (Paratya spp.) and kōura.

Fish ladders work by providing a sloping waterway (in a channel or pipe) for fish to go up, with an appropriate substrate or base that creates roughness, slows the flow and provides areas where fish can move upstream either by swimming or climbing. In New Zealand, substrate ramps have been constructed using gravel, sand and artificial substrates (e.g., drainage products such as Miradrain™ and Cordrain™).

Substrates which use plastic brushes have been used successfully at many New Zealand fish passage facilities and are often the substrate of choice, given their durability and ease of installation. Natural substrates such as straw and brush wood have also been used internationally, but lack durability.

Although smooth substrates were not successful in promoting the passage of īnanga and redfin bullies in the laboratory, field trials conducted to date indicate that successful adult lamprey upstream passage can only be achieved using smooth surfaces. If passage is required at the same site for fish species with differing substrate preferences, it may be possible to install a ramp with two or more substrates and/or substrate with differing spacing between elements. In some situations it may be necessary to install more than one type of ramp to provide passage for all migrating species.

The length and slope of the ramp will also influence fish passage success. Most substrate ramps in New Zealand are also tilted laterally as well as longitudinally. The length which can be negotiated will be related to the slope of the ramp, with fish travelling on steeper slopes benefitting from shorter ramps.

The amount of water flow on the ramp is very important. Using īnanga as a 'design fish', the maximum flow speed that can be expected to be negotiated is about 0.30 m/s. Flows in the range 10–20 l/min have worked well for small fish ladders but higher flows will be required at larger structures. In some situations, higher velocities can be negotiated as long as resting areas or pools are available.

Many passes installed in New Zealand have problems with predation (e.g., piscivorous fishes, rodents and birds), so it is important to ensure that ramps are covered to reduce the risk of predation.

New Zealand examples include Lake Waikare and the Mōkauiti Dam

'Nature-like' fishways are essentially small artificial streams that blend into the surrounding landscape. They can be constructed to provide a link between the head pond and tailrace at hydroelectric facilities to provide passage for a variety of fish species. In most situations this type of pass will also allow the passage of unwanted species. If passage of pest fish is a concern, it may be possible to install a shallow ramp at the head of the channel to limit access.

The main disadvantage of this type of pass is that it requires more space and water than the smaller fish ladder. Different sized materials (including woody debris) should be used in construction and include pools, riffles, runs and backwaters. By including channel diversity, a range of velocities will be provided within the pass. It is important to maintain a low gradient and to shape the channel so that low velocity wetted margins, as well as rest areas, remain available for fish at both low and high flows.

Care must be taken to ensure that the velocity at the channel inlet and outlet can be negotiated by all species - this is particularly important where flow control devices (e.g., gates) are installed. The banks should be planted to provide shade, protection against erosion, and cover for migrating fish.

Fish lifts and locks are fish passage methods that are applicable to high head facilities. Both are expensive and require considerable engineering expertise.

Fish lifts use a substrate ramp to encourage fish to enter a holding tank, which is then lifted to the head of the dam or above head pond level. Depending on the design:'

In New Zealand a fish lift has been part of the elver transfer operation at Karāpiro Dam since 1995, and most of the elvers obtained at this site are collected by this system. The trap into which upstream migrants climb is a floating trap which permits changes in the tailrace water level to be accommodated. At present, all of the catch is removed by operators and held in a holding tank prior to transport and release in the upper catchment.

Fish locks work on the same principle as a navigation lock. Fish are attracted into the lock chamber when the lower gate is open. Periodically, a backing gate crowds the fish into the chamber, the lower gate closes and the chamber fills with water until the water level of chamber and head pond are the same. An upper gate then opens and the fish swim out on their own accord. At some sites fish do not always leave the chamber, which has caused the system to fail. No fish locks are currently in use in New Zealand but a number have been used successfully in Australia.

Engineered fish passes can be costly to construct and retrofit but may be the only option at sites which have difficult access or where large fish such as salmonids and mullet require passage. Most designs have been developed in the northern hemisphere and tend to focus upon the specific requirements of migratory salmonids, but fish passes designed for smaller fish have been engineered in Australia.

In New Zealand a number of vertical slot fishways have been installed but few have been monitored to determine their effectiveness. The largest is at Mararoa Weir (Manapōuri Power Scheme), and recently a vertical slot fish pass was installed at the outlet weir of Lake Taharoa, where preliminary results indicate that small fish, including elvers and galaxiids, as well as shrimps are able to successfully pass upstream. Different site specific solutions to improve the upstream passage of elvers at instream barriers have been installed around New Zealand. (A) - Fish ladder installed at Arnold Dam with substrate (base) of brushes at different spacings; and (B) - Fish ladder using a stone substrate installed at Wairere Falls Power Station. Credit: Jacques Boubée. Many different kinds of climbing media or substrates have been trialed for use on fish ladders, some of which are pictured here. (A) gravel; (B) Cordrain®; (C) sand/concrete; (D) Miradrain®; (E) brush. Scale (black line) = 20 mm.

Fish ladder at Piripaua Power Station on the Waikaretaheke River. (A) Downstream view true right of tailrace at low water level showing transformer cooling water outlet, and the elver or fish ladder along wall. (B) Trap and ramp on bank. Credit: Jacques Boubée. 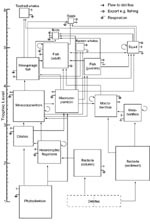 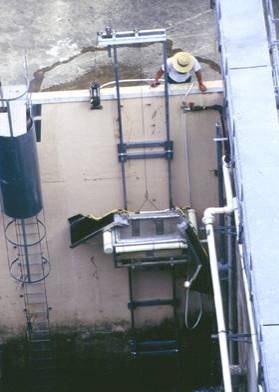