Tuna is a generic Māori word for freshwater eels. The two words will be used interchangeably in this resource.

Māori have traditional systems of belief and an extensive knowledge of tuna. It is not the purpose or place of this resource to attempt to collate and publicise the extensive body of mātauranga Māori that is retained and has been actively practised over centuries by whānau, hapū and iwi. Rather, this resource has compiled and collated the biophysical scientific knowledge that has been published in the national and international literature – some of which is not easily accessible to the New Zealand public.

While New Zealand tuna species are often characterised in terms of biophysical science (family, genus, species etc), Māori also have an extensive range of names for tuna related, for example, to appearance, colouration, season of the year, size, behaviour, locality, and palatability.

The occurrence of the Australian longfin (A. reinhardtii) in New Zealand was confirmed in 1997, from 19 eels caught in the Waikato River. How they got to New Zealand is unknown but may be due to changes in the oceanic currents which transport the passive larvae from the spawning grounds in the South Pacific. Although confirmation of this species in New Zealand is fairly recent, anecdotal evidence suggests that this species may have been in here for at least 25 years.

The Australian longfin eel has a similar life cycle and basic ecology to shortfins and the New Zealand longfin. A. reinhardtii is also long-lived and reaches a large size, similar to A. dieffenbachii. The Australian longfin eel also spends most of its life in freshwater and migrates to the sea to spawn, just like New Zealand eels. However, the glass eel stage of this species arrives in Australian freshwaters in large numbers during summer and autumn, as opposed to New Zealand species where large numbers are seen in spring and summer. 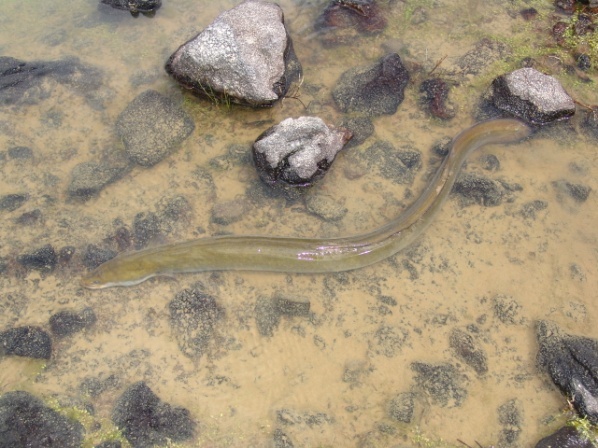 Location of sites where shortfins have been found and recorded in the New Zealand Freshwater Fish Database (NZFFD) (total of 5,814 records out of 31,091 in NZFFD dated between 1925 and 2011). Credit: NIWA Yellow eel (some eels are yellow, or even white). Credit: S.C. Moore