BioRoss 2004: expanding our knowledge of marine life in the Ross Sea 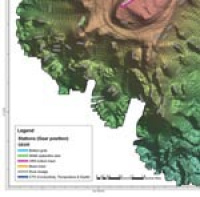 Swath image of Seamount 100 off the Balleny Islands. 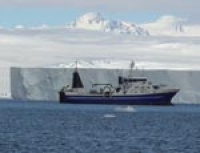 An epibenthic sled is hauled back on deck (top) and a van Veen grab is deployed over the side. (Photos: I. Everson, BAS) 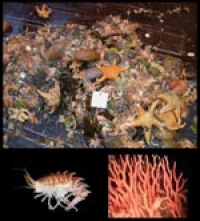 For 40 million years the Antarctic continent has been isolated from adjacent shelf environments by cold deep waters and by the circumantarctic current systems. Consequently, the benthic organisms that have evolved there are very different from those around neighbouring land masses such as New Zealand. Learning about this biodiversity and the factors that influence it were goals of BioRoss 2004.

Collaborating to look at new depths

Although the Ross Sea region has seen extensive research in recent decades, most of the biological studies have been in shallow water, accessible from the ice shelf and using scuba gear. Little work has been conducted on the deeper benthic environment, between 50 m and the shelf break at 800 m. This offshore zone was the target of a seven-week survey conducted from RV Tangaroa in January–March 2004. The Ministry of Fisheries (MFish) funded the survey in support of the New Zealand Biodiversity Strategy. The main objectives were to describe the biodiversity of the benthic macro-invertebrates and fish communities of the western Ross Sea and the Balleny Islands, and to determine the importance of three potentially key factors affecting the distribution and composition of the fauna. These factors were phytoplankton productivity of the overlying water, the physical disturbance of the bottom by icebergs, and the complexity of habitat-forming species (such as sponges and corals) in generating patterns of biodiversity. This work linked with concurrent shallow-water research from an Italian research vessel, Italica. The research programmes of the two vessels were integrated, with Italian scientists working onboard Tangaroa (as well as people from University of Otago, MFish, British Antarctic Survey) and NIWA scientific staff on Italica.

Look before you leap

The study areas were generally surveyed first with Tangaroa’s EM300 multi-beam swath system. This acoustic mapping provided detailed and highly accurate bathymetric data for each sampling transect or seamount, as well as information on how hard the bottom was. This enabled highly efficient sampling, as we could quickly assess the bottom substrates for the different gear types (for example avoiding very rough bottom for the trawl).

Suit the sampling to the stratum

“One size fits all” doesn’t apply when sampling biodiversity, and a range of sampling equipment was deployed on the survey. Whenever practicable, we deployed a van Veen-type grab, an epibenthic sled, and a rough-bottom fish trawl at each sampling site; on occasion we used a beam trawl. Each type of gear sampled different components of the benthos, from the small animals living on and in the sediment (grab) to larger invertebrates and small fish (sled), through to more mobile invertebrates and larger fish (trawl). A video camera was routinely mounted on the grab, to take photographs of the area before sampling, and we also used this several times on the sled.

Recording the data and setting some records

We completed a total of 200 biological stations: 151 in the Ross Sea, and 49 around the Balleny Islands. The sampling design in the Ross Sea worked well, although the position of stations was affected in many cases by sea-ice distribution or seabed that was too rough to deploy a trawl. Large icebergs inshore completely cut off some areas of the coastline at depths less than 100m, and there was also heavy drift ice offshore.

The catch from each grab, sled or trawl tow was sorted by species or broader taxonomic groups, identified, and weighed where possible. We made more detailed measurements on some fish species such as Whitson’s rattail, Antarctic toothfish, and Antarctic silverside. Photographs were taken of each fish species (and many invertebrates) and we compiled a working guide to the fish fauna to ensure consistent identification and naming of specimens. Most invertebrates and fish were preserved for further taxonomic work onshore. Station and catch data were entered into Tangaroa’s computer systems for each sample; the database allowed full integration of the variety of data being collected during the survey.

Onboard, we provisionally identified 57 demersal fish species, with additional myctophids and other mesopelagic species. Catches were generally small. The fish catch amounted to 4250 kg, made up largely of rattail (Macrourus whitsoni), rockcod (Lepidonotothenon kempi), and skate (Bathyraja eatonii). However, the species most frequently caught were icefish (Artedidraco orianae, Cryodraco hamatus), Antarctic silverside (Pleuragramma antarcticum), and the small Trematomus lepidorhinus in the Ross Sea and Lepidonotothenon kempi at the Balleny Islands. There were marked differences in the species composition between the Ross Sea and Balleny Islands. Studies are continuing, but we believe that we caught at least two new fish species during the survey.

The invertebrate catch could not be identified onboard to the same extent as the fish due to the high diversity of groups sampled, the small size of many species, and the poor knowledge of invertebrate taxonomy for Antarctic deepwater. We did determine that the sessile fauna was dominated offshore by sea squirts and corals, in contrast to sponges inshore. We sampled deepwater hydro corals, and our photographs show these corals can form extensive cover at depths of around 500 m. We found a new species of Doto (a nudibranch) and Epimeria (an amphipod), and recorded the stone crab Neolithodes brodei for the first time in Antarctic waters, off the Balleny Islands.

Secrets of a successful survey

Overall, the survey was very successful. Despite bad weather, we achieved the main sampling objectives of the voyage, due in part to the strong cooperation and collaboration between the New Zealand and Italian scientists. The wide variety of gear we deployed from Tangaroa during the survey gave us a much greater appreciation of faunal diversity than if we had used just one or two types of gear. The cameras added to information on the nature of benthic habitats, and sampling instruments collected background oceanographic and environmental data. The multibeam system enabled rapid mapping of seafloor bathymetry and topography and informed our choice of sampling gear.

A short survey of this nature will not fully describe the biodiversity of the western Ross Sea or Balleny Islands. However, it provides an important contribution to knowledge of the fauna and its biogeographic structure, and a valuable biological and physical baseline for the future to assist in management of the region.

Malcolm Clark and Ashley Rowden are based at NIWA in Wellington.

This biodiversity research was funded by the Ministry of Fisheries. The voyage was also funded by Land Information New Zealand (LINZ) to carry out an extensive seabed mapping survey.