Alligator weed is an introduced sprawling, rooted perennial which forms dense mats of vegetation up to 1m tall that can cause serious problems in drainage canals, wetlands, pasture and cropping land. Plants will grow in both fresh and brackish water, in pastures or terrestrial crops, although it will not root in water deeper than 2–3 m. As a marginal weed it can support a floating mat of vegetation over deeper water.

Its current distribution is widespread in Northland and Auckland Regions with scattered sites in Waikato, Bay of Plenty and Manawatu-Wanganui Regions.

Parrot's feather is a robust, rhizomatous perennial with leafy stems that is common in both flowing or standing water and can also grow as a marginal species on damp ground. It can form very dense mats of floating vegetation over water less than 2.5 m deep. This introduced plant may also grow as a submerged plant, with finely dissected leaves similar to the native milfoils.

Propagation and spread is by stem fragmentation and lateral stem growth. It is rapidly spreading in the North Island, and the northern South Island.

These introduced species are erect or prostrate perennials that are common around the edge of small protected lakes, ponds and drains and may develop surface floating growth over deeper water.

Both species of Ludwigia have branched stems with roots at the nodes either attached to soil or hanging in the water. L. palustris has reddish, opposite entire leaves that are acute to acuminate up to 3 cm long and with a winged petiole up to 2.5 cm long. The leaves of L. peploides are alternate and obtuse, and up to 6 cm long. Their upper surfaces are glossy and they taper into petioles that are up to 2.8 cm long with two dark green swollen semi-globular stipules at the base.

L. peploides has conspicuous (2 cm) bright yellow flowers during the summer which arise on stalks from the leaf axils. L palustris has small (3 mm) inconspicuous flowers without petals that are solitary in the leaf axils.

The introduced species, Glyceria maxima, has stout erect leaves, with creeping rhizomes that form large patches. Glyceria is unique amongst grasses in that it frequently has closed sheath. This particular species is distinguished by the panicles that are branched, rather dense and have numerous spikelets.

It is scattered but locally common in the Waikato and Hauraki plains as well as parts of Otago. Found on the margins of lowland lakes, rivers and drains. In particular, glyceria can be a troublesome drainage weed and although palatable it has been implicated in the cyanide poisoning of livestock.

Zizania is a tall (2–5 m) coarse perennial that has a strong deep root system consisting of bulky spreading rhizomes. It is usually found in the berm of waterways, but also invades swamps and pastureland, and is tolerant of both fresh and brackish water.

It flowers sparsely in November and December and mature seed, if dropped in the water, is carried by tidal action both up and down the river to establish new centres of growth. Zizania also propagates via rhizome extension and fragments that spread by water movement.

Native to Asia, it was introduced into New Zealand around the turn of the century in the ballast carried by timber ships, which was discarded on arrival in New Zealand. Its current distribution extends from Northland to Auckland and along the Wairoa River.

P. decipiens is an erect native annual herb up to 0.5 m to 1 m tall, occurring at or above water level on fertile sites along river banks or in marshy areas. It has reddish stems with lance or willow shaped leaves, tapering at either end. The leaves are alternate, simple, and entire with sheathing stipules. The leaves may be 5–12 cm long and up to 5 cm wide, without prominent veins but are sometime reddish and usually have dark blotchy markings. Flower spikes are slender and erect but droop towards the apex, with pink or sometimes white flowers. The fruits are lens shaped, shiny dark brown and comprise an important food source of waterfowl that also spread the seed.

P. decipiens is widespread but tends to be more common in the North Island, found on the margins of pools and slow streams, and in swamps, or muddy ground.

For further information on these plants species see: 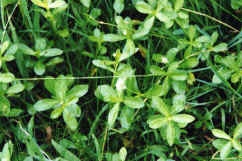 Alligator weed flowering. Reproduction is vegetative by the extension of prostrate stems or stem fragmentation. The floating fringe of marginal mats is also readily fragmented and dispersed. Seed set is unknown in New Zealand. (Photo by P. Champion) 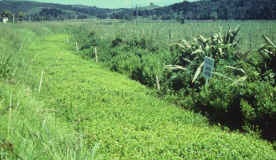 Alligator weed takes over a Northland drain. (Photo from Coffey and Clayton, 1988) 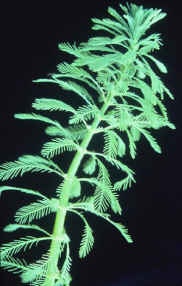 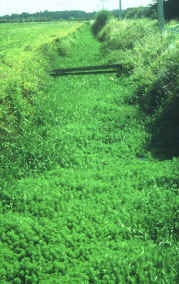 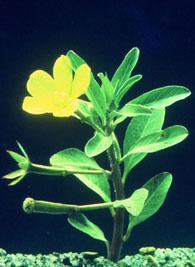 Ludwigia peploides spreading on the lower Waikato River. (Photo from Coffey and Clayton, 1988) 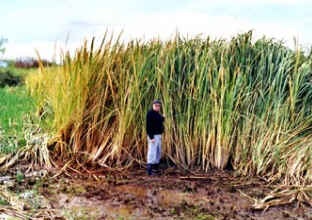