Across the North Island, soil moisture levels improved very significantly nearly everywhere during the past week. This was primarily caused by a storm which brought heavy rain to the North Island during Thursday and Friday last week (4th-5th January). The largest improvements were observed across Gisborne, Bay of Plenty, much of Waikato, and Manawatu-Whanganui, with substantial improvements also found across Wellington, Taranaki, Auckland, and most of Northland. The only notable decrease in soil moisture levels during the past week occurred on the Aupouri Peninsula in the Far North. The driest soils across the North Island compared to normal for this time of the year are found on the Aupouri Peninsula, while the wettest soils for this time of the year are located in coastal Bay of Plenty.

The vast majority of the North Island hotspots that were previously in place have now dissipated due to the recent heavy rainfall. Current hotspots are found on the Aupouri Peninsula in the Far North, as well as small portions of Kapiti Coast, Horowhenua, and Central Hawke’s Bay.

The only current hotspot in the South Island is a sizeable one which covers far southern Canterbury as well as a majority of Otago and Southland.

In the North Island, high pressure will prevent significant rainfall for most coastal areas through the upcoming weekend. However, there will be the possibility for pop-up afternoon showers and thunderstorms across interior locations on Friday, Saturday, and Sunday (12th-14th January), which could produce localised rainfall amounts of 15-30 mm. By Tuesday or Wednesday there will be a chance for a moisture-rich front to cross the North Island, with many locations receiving 20-40 mm of rainfall.

With much of the North Island likely to see at least moderate rainfall by the middle of next week, minor additional increases in soil moisture levels are expected in many areas. With moderate to even heavy rain possible in the Far North, the hotspot on the Aupouri Peninsula is likely to weaken or even dissipate during the next week, while the small hotspots in Kapiti Coast, Horowhenua, and Central Hawke’s Bay may show minor improvement.

In the northern half of the South Island, moderate to heavy rainfall will continue today and into Friday, with 80 mm or more possible in the West Coast and Tasman, and 25-50 mm east of the Southern Alps. On Sunday and Monday (14th-15th January) only a few showers are expected in the West Coast. However, heavy rain could return to western areas by Tuesday and Wednesday next week, although eastern areas will remain mostly dry. At least a few showers will be possible across Otago and Southland next Wednesday and Thursday, with amounts of 10-15 mm there.

Substantial increases in soil moisture will be likely during the next week across the West Coast and Tasman due to expected heavy rainfall, with at least minor to moderate increases possible from central Canterbury to Nelson. For the lower South Island, possible showers in the middle of next week could prevent the large hotspot there from worsening, although significant improvements are also not anticipated. 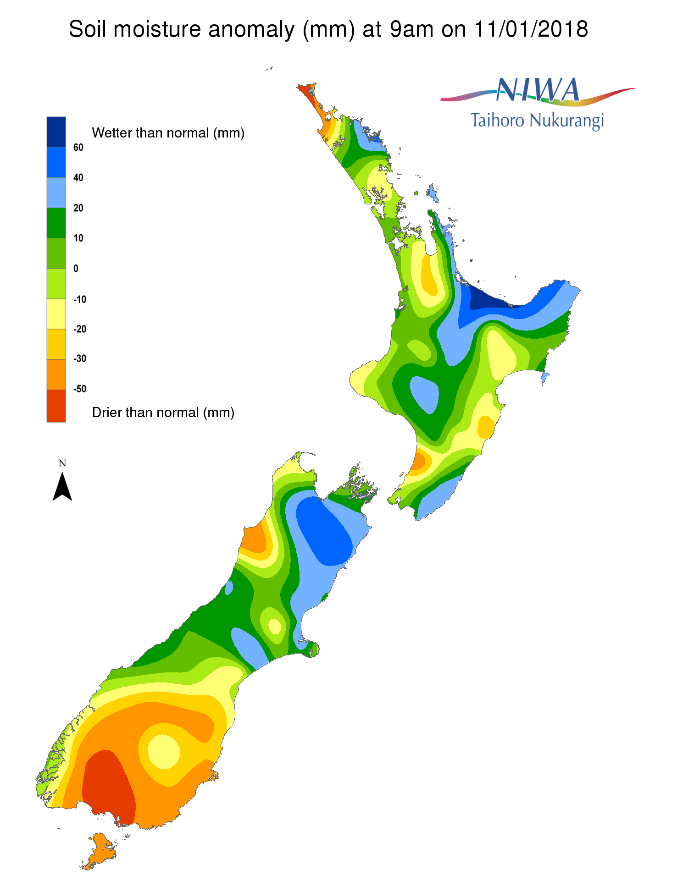