This week we look at a gastropod that cements other mollusc shells, small stones, dead coral or any other miscellaneous handy debris to the outside of its shell as it grows. Xenophora species are commonly known as carrier shells or “shell collector shells”. The scientific name literally means “bearing (or carrying) foreigners”.

It is thought that shallow water Xenophora attach these items to themselves for visual camouflage, but they also use these extra adornments for increased shell strength and to act as stilts allowing the snail to lift the soft parts of its body up off the substrate giving the animal olfactory camouflage from predators (1). Small stones and a barnacle plate from the local substrate are the shell decoration and camouflage of choice for this specimen of Xenophora (Xenophora) neozelanica neozelanica collected from 142 m, in the Bay of Islands. [Peter Marriott, NIWA, Oceans Survey 20/20 Bay of Islands]

There are currently 16 species of Xenophora worldwide. We collected several specimens of the shallow water New Zealand species Xenophora (Xenophora) neozelanica neozelanica Suter, 1908 on our 2009 Bay of Islands Survey from 60-147 m. You may be thinking we have made a typo in the name by including the subgenera Xenophora and the subspecies neozelanica, but in fact this is the current valid taxon name in the world register of marine species database.

Xenophora (X.) neozelanica was successfully kept alive in aquaria by Dr. John Morton in 1971 and a report on their behaviour found that they were unselective deposit (mud) feeders, and travel across the seafloor with a “one-legged stomp” motion (1). Spot the Xenophora! Their effective camouflage makes it hard to find amongst the shelly substrate in this seafloor. This image was taken in the Bay of Islands at 70 m depth. 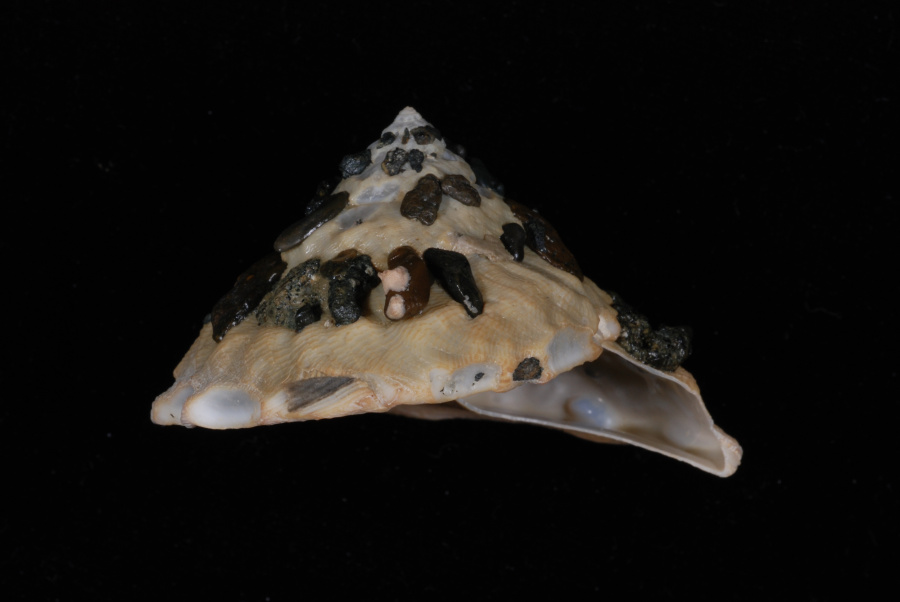 Xenophora attach their camouflage to themselves at intervals as they grow. You can see a nice size series in the chosen pebbles from this side view. [Peter Marriott, NIWA, Oceans Survey 20/20 Bay of Islands] Generally Xenophora chose to cement on upside down bivalve shells and gastropod shells with the aperture facing up and take about 1 1/2 hours to do so, meticulously turning the items over with their foot or proboscis (different species use different methods) to get them into the correct orientation. This specimen was collected from 137 m. [Rob Stewart, NIWA, Oceans Survey 20/20 Bay of Islands]