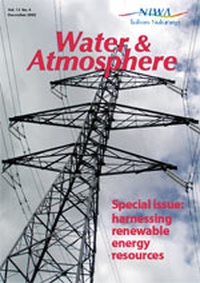 As harvesting the oceans' energy becomes a viable proposition, Craig Stevens, Murray Smith, and Richard Gorman describe some of the research that underpins the reality.

New Zealand sits in one of the most dynamic regions in the world’s oceans. The 'roaring forties' and 'furious fifties' can whip up waves as high as three-storey buildings. The landmass and its hidden submarine mountains guide extensive ocean currents around New Zealand from the north and from the south, while the shape of the coast and the rise and fall of the tides generate swift currents at specific locations.

How big is the resource?

While a seemingly boundless resource is out there, putting a number on the amount of energy actually available is not so simple. It varies depending on where and when you look. As a guide, we can say that ocean waves bring around 25 kW per metre of coastline, with more energy arriving along the west and southern coasts, and less on the more sheltered north-eastern regions.

Wave energy is obviously variable in time, depending on when and where the storms that drive waves occur. Tidal energy is much more regular and predictable. However, it generates high currents only near shore. Headlands and constrictions like Cook Strait focus the currents, giving energy levels reaching 750 W per square metre.

It’s not surprising that these simple estimates are not enough to convince energy investors about the viability of the resource. What investors need to hear are reliable estimates of energy resources for waves and tides at specific locations. These estimates must incorporate an understanding of how the amount changes throughout the year, and even how it might vary with climate change.

Scientists can sample only a small proportion of the ocean’s vast surface. A 20-year history of wave climate in the New Zealand region has been built up from models and tested with the few observations available. Because they are driven by the sun and the moon, tidal heights can be predicted with certainty using calibrated models. Tidal flow, however, is often more tricky to estimate than tidal height because the flow itself generates eddies and fluctuations that are not easily simulated.

Computer models that take into account all the complexities of the coast, winds, and seabed, and how they affect flow, are brought in to help (see 'modelled hotspots' image). Like any computer model of the natural environment, specific results must be properly validated. That is where research to understand how the flow processes work comes in: as a building block to make these models as accurate as possible.

Don't expect to be using energy from marine sources just yet. It’s one thing to know there’s an enormous pool of energy out there, another to actually extract it. Methods and devices are currently under development around the world. Other forms of energy extraction (such as wind generation) have become commercially viable only recently following extensive research and development. Marine energy is not as well developed and remains an energy source of the future.

Imagine this: just as a large wind farm comprises many tens of generators, a 'wave farm' might have as many wave-driven energy-extractors, possibly bobbing devices or giant ’sea-snakes' or 'nodding ducks'. Alternatively shore-based extractors could form artificial cliffs where a built-in blowhole drives air through a turbine. Undersea turbines that look quite similar to wind generators could be mounted in key locations where tidal flows were known to be substantial. These are not just fanciful ideas: they are all at the testing stage today.

Linking offshore devices to the electricity grid will expose cables to the same rigours as getting power across Cook Strait. Cables have to be laid in well surveyed waters, with good knowledge of the bed material and the effects of bed-level currents.

Once the wave farm devices are operational, many of the techniques used to monitor and predict the resource can also monitor the behaviour and well-being of the generation devices, as well as determine their influence on the surrounding environment. Modelled forecasts of waves and tidal flows can be used to predict the output from these variable sources and to assist in matching available power to demand.

The Foundation for Research, Science & Technology has funded a joint project by Industrial Research Ltd, NIWA, and Power Projects Ltd to develop New Zealand-based skills in wave energy either through design of our own device or association with an overseas device. The 'New Zealand Wave Energy Project' focuses on an off-shore 'point absorber' with a newly developed form of generator.

Understanding how the ocean works is vital to gauging marine energy from many perspectives: the resource, surviving extremes, maintenance, and operation. NIWA uses a range of approaches to measuring the oceans.

Over the last decade, developments such as satellites and airborne lasers have provided huge advances in understanding the details of how waves and currents work. However, the Waverider buoy is still an indispensable workhorse. Used in coastal situations all around the world, it measures the motion as it rides on the waves and can radio wave conditions back to land for display in real time and for analysis.

Dr Craig Stevens and Dr Murray Smith are marine physicists with interests in environmental fluid dynamics. They are based at NIWA in Wellington. Dr Richard Gorman, a specialist in modelling wave dynamics, works at NIWA in Hamilton.