A hot and steamy summer saw Kiwis heading down to rivers and lakes to cool off. But they weren’t the only ones enjoying the warmer weather – algae had a great time too.

Periphyton is the name given to the community of algae that grows on river and lake beds – sometimes called slime. Phytoplankton is the algal community that grows floating in the water column of lakes and large rivers.

Algae are essential parts of freshwater ecosystem food webs. Algae use light and nutrients to create plant biomass by photosynthesis, and fuel food chains. As thin films and short/sparse filaments, it is an important fuel at the base of healthy aquatic food webs, turning nutrients and sunlight into a food for invertebrates, which are in turn food for fish and water birds.

But you can have too much of a good thing.

That comes down to the balance of growth-stimulating factors: mainly light, nutrients (nitrogen and phosphorus), warmer temperatures, steady flows and stable bed attachment sites – and controlling factors – high levels of flow disturbance and grazing by insects.

Conditions in summer are usually most conducive to periphyton blooms – long days and lots of sun. Warm water increases algal growth rates and inhibits grazing, and the periods extend between spates (moderate flow spikes) that slough or scour the periphyton. So, unfortunately, periphyton often blooms at the very time when people most want to use rivers for recreation, making them more of a nuisance.

Are there different types of blooms?

There are two types of algal blooms – those caused by phytoplankton, that are in the water column (predominant in lakes and the ocean), and by periphyton, which are attached to the bed (predominant in rivers). So blooms are either planktonic or benthic.

Like all plants, they need light and nutrients (particularly nitrogen and phosphorus), and growth rates also increase with water temperature. Many lakes separate into ‘layers’ in summer due to surface water warming. This increases the duration, intensity and exposure to sunlight of phytoplankton in the surface layer. All these factors tend to result in phytoplankton algal blooms being generally greatest in summer in stratified, nutrient-rich lakes.

How can blooms affect health?

Harmful effects of algal blooms on swimming, drinking water, and other recreational water contact are increased when they consist of toxin-producing cyanobacteria (also known as blue-green algae). These can make water contact or ingestion (during swimming or drinking) dangerous.

People are most likely to be exposed to highly toxic blooms when they are concentrated in surface floating scums and/or are being blown towards the down-wind shore of a lake. Dogs are susceptible to cyanobacterial poisoning, likely due to the combination of sensitivity and their behaviour of eating smelly material and ingesting scum material caught in their fur when grooming with the tongue. Periphyton in rivers can become more accessible to dogs during summer low flows, as falling water levels expose growths, and gas bubbles within productive mats lift periphyton off the river bed and it settles along the river edge.

Are they a new phenomenon and/or do they occur more frequently now than in the past few decades?

Blooms aren’t a new phenomenon but there’s some evidence that planktonic and benthic blooms are increasing in number and severity. Given blooms are most likely to happen in summer and occur when there’s warmer water temperatures, more sunlight and lower flows, there are seasonal variations. So, if we have a warmer, drier summer, we’re more likely to see blooms as opposed to weather conditions that are cooler and wetter. Green algae is not toxic, it often looks like strands of green hair flowing in the current. [Photo: Landis Hare] Many councils around the country post signs warning of the danger of blue-green algae. [Photo: John Quinn]

Are certain areas or types of waterway more or less susceptible to blooms, and why?

Periphyton in rivers tend to be more common in summer due to influences including long day length, high light, warm temperatures and longer gaps between high flows that scour growths from the river bed. Rivers with stable stony beds are more suitable for periphyton growth than those with mobile sandy beds. Cyanobacterial periphyton mats have been associated with moderate to high levels of dissolved nitrogen (as nitrate plus ammonium). These mats are particularly adept at trapping fine sediment and appear to be able to scavenge phosphorus in this sediment to supplement phosphorus in the water column, enabling them to develop high biomass where the water has relatively low dissolved phosphorus.

Planktonic blooms usually occur in lowland lakes where the land around them has been developed and there are higher levels of nutrients in the lake. Benthic blooms tend to occur in gravel lowland rivers. They’re more common in rivers on the eastern side of the country.

How can people know if a waterway or swimming hole may be at risk of a harmful bloom?

Many areas that may be at risk are signposted with warnings. Regional councils and other agencies publish information about areas affected by blooms. This has recently been condensed into a simple format that covers microbial water quality and harmful algae blooms on the Land and Water Aotearoa website.

But people can also see evidence of blooms for themselves, in some cases. Abundant filamentous green algae or didymo can be unsightly, but these growths are not toxic and don’t present a health risk. Potentially toxic cyanobacteria are often visible as surface scums or brown-black algal mats attached to streambeds. Affected water may appear discoloured and may also smell unusual. If you are in doubt, it’s advisable not to swim in the water. 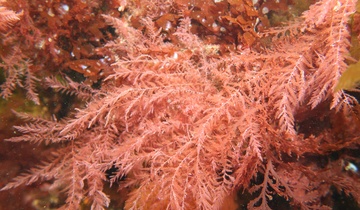