Hotspots in the North Island are located across Gisborne, the Tararua District, and in parts of west coastal Taranaki.

The only hotspot in the South Island is in Southland.

Active weather is expected to be found across New Zealand this weekend, persisting across the North Island into early next week, before high pressure builds in and brings more settled conditions.

On Saturday, rainfall totalling 10 to 25 mm is expected in a band extending from western Northland into the Central Plateau. Across the lower and eastern North Island, 5 to 15 mm are forecast aside from Gisborne where totals less than 5 mm are likely.

Sunday will have another round of rain across the northern and western North Island, with 5 to 15 mm commonplace but localised amounts exceeding 25 mm. A narrow band of rain may persist from Monday into Tuesday, pivoting about the upper and western North Island. Each day, 10 to 20 mm is likely, although there may be areas of more persistent rains where totals exceed 25 mm.

From Wednesday into the late week, high pressure is likely to build across the island, yielding a return to drier conditions.

In the South Island, rain about the north on Saturday afternoon will total up to 5 mm and isolated showers in coastal Canterbury and Fiordland will total 5 mm or less. Sunday will have wet conditions, with the top of the island generally receiving 20 to 40 mm and a risk for localised flooding. Western areas will have a bit less, 15 to 35 mm, although sharply higher amounts up to 75 mm can be expected in the ranges. In the east, rainfall is expected to total 5 to 15 mm with 5 mm or less about the far south.

Wet conditions will prevail on Monday along the West Coast with another 10 to 25 mm expected. Rain is also possible in the north, with most places seeing 10 mm or less, especially in the west.

From Tuesday into Wednesday, rainfall chances about the South Island will generally decrease as weak high pressure builds overhead. Scattered rain cannot be ruled out, although totals will mostly be 5 mm or less.

Late in the week, a front over the Tasman Sea may approach, bringing a return to some wet weather in the west. 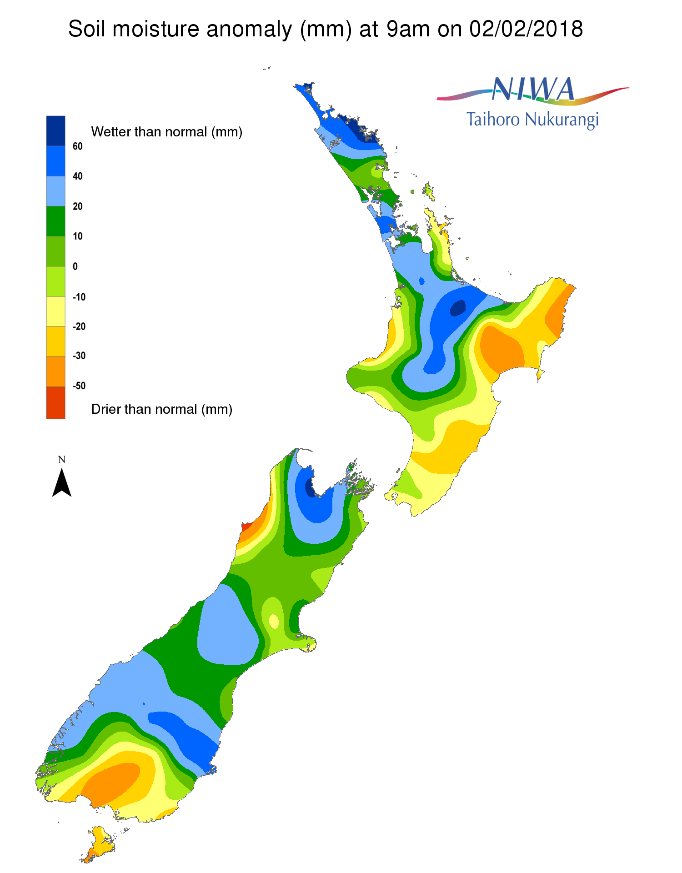