Across the North Island, soil moisture levels generally decreased slightly during the past week. These decreases were most notable from northern Waikato (including the Coromandel Peninsula) south to the Central Plateau and into Wairarapa. Other minor decreases were observed in parts of Auckland, western Taranaki, East Cape, and Wellington. The driest soils across the North Island compared to normal for this time of the year are found in parts of Northland, Taupo, and Tararua District, while the wettest soils for this time of the year are located along the Kapiti Coast.

Several small and disconnected hotspots are now in place across the North Island. This includes isolated parts of Northland, Auckland, Taupo, coastal Manawatu-Whanganui, and Mahia Peninsula. A more significant hotspot also stretches from about Napier south through Wairarapa.

Across the South Island, soil moisture levels generally did not change substantially in northern areas this past week, but soils in central and southern areas continued to get much wetter than normal thanks to more heavy rainfall in recent days. In fact, many parts of Otago have already seen more than double their average November rainfall. Notably, Ranfurly has experienced its wettest November on record with 123 mm, with records going back to 1896. Other high rainfall amounts include Middlemarch with 159.9 mm and Oamaru with 156.2 mm. The driest soils across the South Island compared to normal for this time of the year are found in interior Marlborough and Nelson, while the wettest soils for this time of the year are found in coastal South Canterbury and Otago.

A small hotspot is currently in place in northwestern Marlborough. In the North Island, significant rainfall is expected during the next week as several waves of moisture move through the region. After Wednesday’s rainfall brings 5-15 mm to many locations, fairly tranquil weather is expected on Thursday and Friday (22nd -23rd November). However, a front will bring moderate rainfall to northern areas on Saturday, with perhaps another 15-30 mm arriving for much of the North Island on Sunday (25th November). Additional moderate rainfall is possible early next week as low pressure sits nearby, with another 15-25 mm possible. In total, rainfall amounts of 50-75 mm could be fairly widespread across the North Island during the next week, with isolated amounts near 100 mm possible.

With such substantial rainfall amounts anticipated in the next week, moderate to even significant improvements in soil moisture levels are likely in many areas. This will likely dissipate the small hotspots located in northern and central parts of the North Island, while shrinking and weakening the larger hotspot located in Hawke’s Bay and Wairarapa.

In the South Island, significant rainfall will once again be possible in eastern areas during the next week, while western areas are likely to see much sparser amounts. Generally tranquil conditions are expected through to Friday (23rd November) before a front brings 5-10 mm on Saturday. However, Sunday into Monday may bring another round of heavy rain to the east coast, with amounts of 25-40 mm possible. Scattered showers may produce another 5-10 mm in the same areas during Tuesday and Wednesday (27th-28th November). Weekly rainfall totals could reach 40-75 mm along the east coast, but 20 mm or less is expected for the West Coast and parts of interior Southland.

Heavy rain for the eastern South Island will keep soils much wetter than normal in most places, while some improvement is likely in the upper South Island. Slight decreases are possible in western areas and interior Southland. The small hotspot currently located in northwestern Marlborough may weaken or even dissipate in the next week.

The New Zealand Drought Index (NZDI) map below shows increasing dry and very dry areas across the North Island and upper South Island as of 18 November 2018. However, with significant rainfall likely in these areas in the next week, some improvements are likely. Please note: some hotspots in the text above may not correspond with the NZDI map, mainly because the NZDI uses additional dryness indices including one which integrates the rainfall deficit over the past 60 days. Changes are therefore slower to appear in the NZDI compared to the instantaneous status maps of soil moisture anomaly. 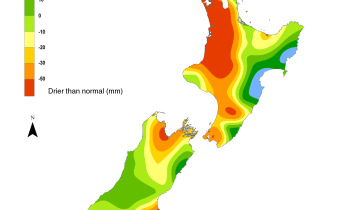