Heavy rainfall across several regions in the North Island and northern and eastern South Island led to serious flooding in some areas. Whangārei (64.4 mm) and Auckland/Māngere (56.6 mm) observed their wettest hours on record since at least 1979 and 1965, respectively. Parts of Auckland and Bay of Plenty received more than a month’s worth of rain in 10 hours on Monday and Wednesday, respectively. In addition, NIWA’s climate station in Gisborne recorded over 170% of the March monthly normal since Monday. Data from weather stations operated by Gisborne District Council shows that some locations received upwards of 500 mm of rain this week. Elsewhere in the North Island and northern and eastern South Island, weekly rainfall amounts generally exceeded 30 mm. Conversely, little if any rainfall fell in Otago and Southland. A weak front caused 1.8 mm of rain in Invercargill on Thursday morning, which has received just 35% of normal rainfall from December 2021 through March 2022 so far.

In the North Island, persistent rainfall is possible over the next week across Gisborne, Hawke’s Bay, and Wairarapa. Weekly totals of 25-75 mm are possible. With soils already saturated in these areas, additional rainfall will prevent drying and in some cases may exacerbate flooding. Scattered rainfall across the remainder of the island will likely total 10 mm or less.

Soil moisture levels may decrease slightly in the western and northern North Island, but the redevelopment of hotspots looks unlikely.

In the South Island, widespread below or well below normal rainfall is forecast, with several regions likely to receive little or no measurable rainfall. Scattered showers about northern Canterbury and eastern Marlborough may total 5 mm or less.

Soil moisture levels are expected to decrease across most of the island. Importantly, hotspots in southern Otago, Southland, and Stewart Island will intensify and grow.

Looking further ahead, some rain is possible in the driest areas starting from around 1 April (Friday), although there is considerable uncertainty in the exact track of any possible low pressure system. Overall, the signal over the next month is for a continued reduction in rainfall about the lower South Island and Stewart Island. As of 22 March, the New Zealand Drought Index (NZDI) map below shows that dry or very dry conditions are located in Northland, Auckland, northern Waikato, western Bay of Plenty, coastal Otago, and much of Southland. In addition, extremely dry conditions are located in parts of coastal Southland and Stewart Island, with meteorological drought near Tiwai Point and in northern Stewart Island. With recent rainfall about the North Island, it is likely that NZDI values will ease over the coming week. 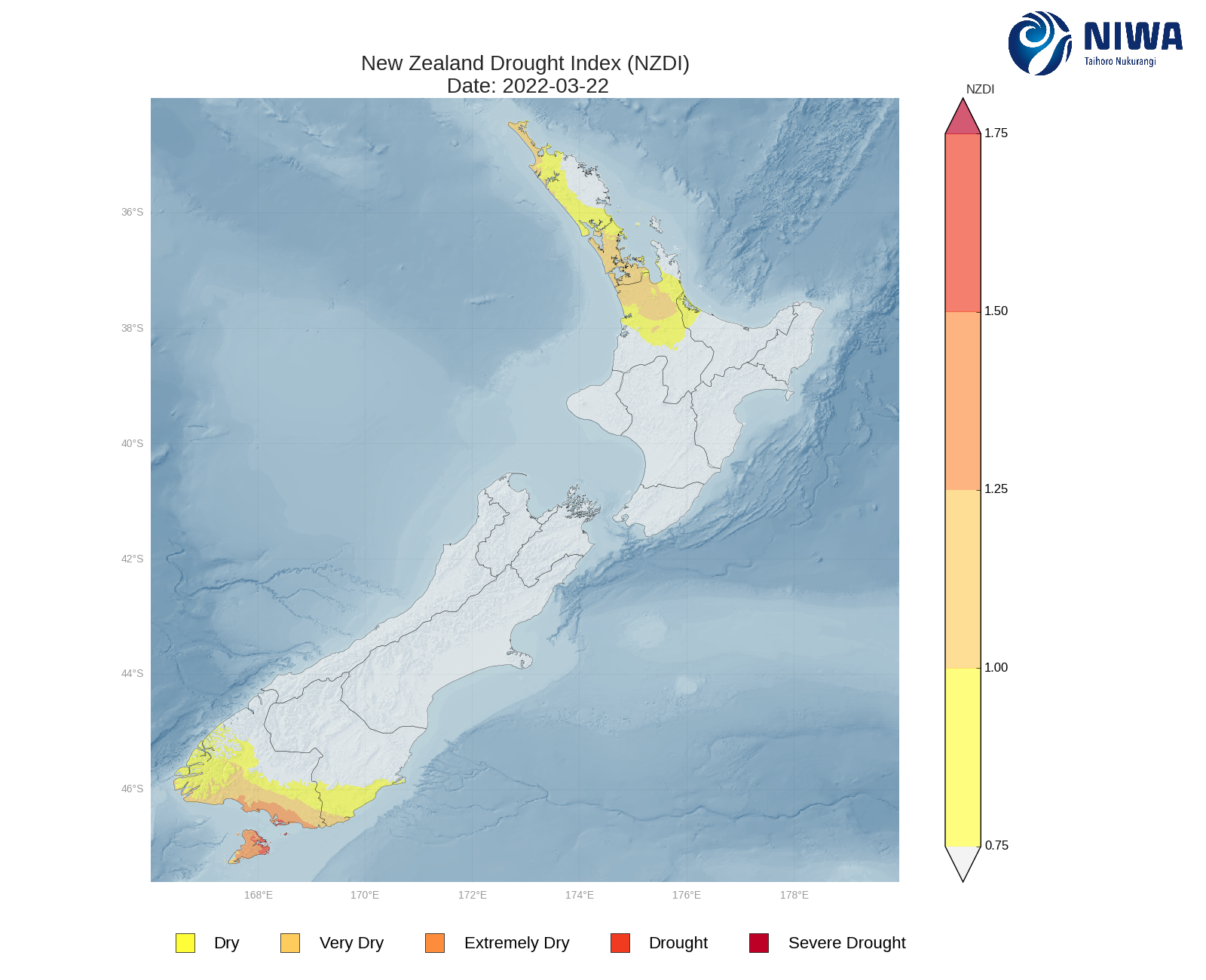