Gathering, eating and sharing wild kai (food) has always been a very important part of Māori culture and wellbeing - this research project aimed to characterise the risks associated with consuming kai collected from rivers, lakes and coastlines.

Gathering, eating and sharing wild kai (food) has always been a very important part of Māori culture and wellbeing.

A broad range of traditional kai sources are still harvested from freshwater and coastal environments and include fish, shellfish, crustaceans and plants. Historically, this kai has been gathered and eaten in large quantities, but recently these foods have become increasingly susceptible to human-generated contaminants. Potentially toxic contaminants include heavy metals in stormwater, pesticides from agriculture and naturally occurring heavy metals such as mercury and arsenic, which, are associated with geothermal activity.

Working in partnership with the iwi from the Rotorua and Temuka regions, our research aimed to characterise the risks associated with consuming kai collected from rivers, lakes and coastlines. Our research partners included the Te Arawa Lakes Trust, Te Runanga o Arowhenua and Tipa & Associates. We focused on those contaminants that bioaccumulate, such as organochlorine pesticides (DDTs, dieldrin and lindane), polychlorinated biphenyls (PCBs), pentachlorophenol and dioxins, as well as heavy metals such as mercury, arsenic, cadmium, lead, copper and zinc. Such contaminants may be derived from industrial or agricultural applications, urbanisation. In addition, mercury and arsenic are found at elevated levels in geothermal regions.

The impact of environmental contamination on the resident wild kai, and in turn, on Māori iwi/hapū consuming them, has not been investigated to date. A review of wild food in New Zealand identified gaps in knowledge of risk of consuming non-commercial wild-caught foods, especially in terms of consumption levels (and hence exposure).

This research, funded by the Health Research Council over a three year period, ultimately aimed to improve Māori health by identifying, quantifying, and effectively communicating the risks associated with the collection and consumption of wild kai.

There were four main components to the research:

In this study we've documented kai gathering, processing and consumption patterns from iwi participants (current and historic patterns). From this we can conclude that there has been a substantial change in kai gathering behaviours. This is particularly evident in the change in local consumption rates for a variety of kai species that we've quantified. For example, only 13% of the total fish consumption by Te Arawa and Arowhenua participants is derived from the wild, with the remainder being store-bought. We've explored cultural and societal barriers to current day collection practices.

We've developed a quantitative food chain model for mercury biomagnification in the Te Arawa lakes, showing that risk of exposure to higher levels of mercury increases with decreasing water quality (in part due to shorter food chains in more polluted lakes).

The relationship that has been identified between mercury uptake, food chain length and trophic status of lakes differs from what has been found for other temperate lakes internationally, where mercury uptake is generally lower in more eutrophic lakes. This research was undertaken to determine potential pathways of exposure for kai gatherers and whether this differed in response to a major ecosystem driver, namely eutrophication. This knowledge increases our understanding of factors which may increase risk associated with kai consumption.

We've done this by undertaking quantitative, additive risk assessments using US EPA protocols for multiple species and locations. We've derived indicative acceptable consumption rates (numbers of meals/month) for multiple species, across all sites and on a site-by-site basis, using both cancer and non-cancer health endpoints and lifetime exposure. For Te Arawa, these consumption guidelines will be valuable in extending the scope of species management plans to include limits based on human health considerations.

This risk may be associated with naturally occurring bioaccumulative contaminants (such as mercury and arsenic from geothermally-influenced lakes) and also with legacy contaminants such as DDT, which were historically used, especially in rural areas.

Management of the contaminant source is therefore impractical in some cases. However, this information will assist health officials and community groups to educate people and make them aware of the increased risks and associated safe consumption practices. This will need to occur on an ongoing basis. Such management will need to be flexible to account for emerging contaminants, which represent another potential legacy. 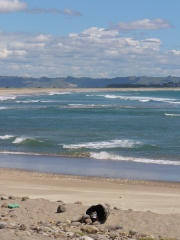