This page describes the role of toothfish in the ecosystem and the potential effects of fishing.

Effects of toothfish on prey

Toothfish primarily eat other demersal (living close to the seafloor) fishes and squid, but in general their diet depends on which species live around them—i.e. they eat anything they can fit in their mouth. However, with the exception of squid and Antarctic silverfish, these species are also caught as bycatch in the toothfish fishery. So, the fishery could potentially change the prey available to toothfish. This map shows the total amount of toothfish caught, in metric tonnes, in each area (pixel) throughout the Ross Sea between 1997-2015. The effects of the toothfish fishery on toothfish prey species will be greatest where the most fishing effort is concentrated—on the Ross Sea slope. Total amount of toothfish caught in each area (pixel) throughout Ross Sea. [NIWA] “Minimum realistic model” to describe the distribution and dynamics of toothfish and their main prey species in the Ross Sea region, with the highest biomass in dark blue and lowest in light blue. [NIWA] Effects of toothfish on predators

The main predators of Antarctic toothfish appear to beType C killer whales, Weddell seals, and sperm whales. For the toothfish fishery to affect toothfish predators, the predators must have an ecological dependence on toothfish. The fishery also has to affect the availability of toothfish to the predators.

Killer whales have also been seen eating toothfish in McMurdo Sound. As with seals, scientists don’t know whether these killer whales are dependent on toothfish for food. Sperm whales: no work has been done to date. Seals have been seen eating toothfish in McMurdo Sound. Scientists don’t know whether these seals are dependent on toothfish for food. Ice cover may provide refuge for toothfish, meaning any dependency is likely to be seasonal. See the video below. Availability of toothfish to predators

Learn more about the sea ice-based survey we conducted to look at how available toothfish are to predators. It has been suggested that the drop in toothfish numbers caused by the fishery could in turn cause an increase in one of its prey species—Antarctic silverfish (Pleuragramma antarcticum)—in the Southwestern Ross Sea. This increase in silverfish was hypothesised to provide more food for Adélie penguins and result in an increase in their populations, as observed as a doubling since 2001. This has been shown to be highly unlikely by Pinkerton et al. (2016), who estimated the potential effect of the increased prey on penguin biomass to be a very small increase in penguin numbers. Since 2001 Adélie penguins have increased in their populations. [Philip Lyver, Landcare Research]

Effect of fishery on non-target species caught by the fishery

Bycatch in the toothfish fishery is low, and for most species, the effects of a reduction in toothfish on abundance of toothfish prey are likely to be bigger than the effects of mortality through bycatch. However, there are some species that are not prey for toothfish, namely skates (rajids). 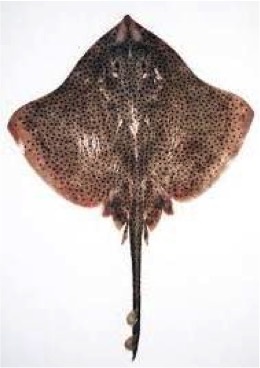 Skates are the best example of the direct effect of the fishery on a prey species, as they are not prey for toothfish. [NIWA]

Skates can survive the capture process, and live skates are released at the surface. Survival rates are not known. Mark-recapture experiments for skate have been underway for a number of years, but scientists have not yet developed abundance indices for skates. Results from these studies will help us estimate skate numbers, and determine whether bycatch is likely to negatively affect them. Tag-release experiments for skate have been underway for a number of years. [MPI Observer Programme]

CCAMLR monitors the bycatch of a number of benthic (living on the seafloor) invertebrate groups such as corals, sponges, and sea pens. These organisms are particularly important as they may be very long-lived, fragile relative to fishing gear impacts, and may provide habitat for other organisms in the ecosystem. CCAMLR monitors the bycatch of a number of benthic invertebrate groups. [NIWA]

The Impact Assessment Framework CCAMLR uses, summarises the cumulative footprint of all longline fishing efforts to date, including assumptions about the lateral movement of longlines. Because the area is so large, the total amount of seafloor touched by longline gear as of 2013 was less than 0.5% of the surface area within fishable depths. Additionally, no relationship between the occurrence of fragile invertebrate groups (Vulnerable marine ecosystems (VME) indicator taxa) and the abundance of toothfish has been detected—i.e. we are not aware of any association of toothfish and VME indicator taxa that could result in the inadvertent targeting of VME taxa by fishermen targeting toothfish. Cumulative footprint of all longline fishing efforts to date (based on the amount of fishing effort), including assumptions of some lateral movement of longlines.