A primary aim of the Sultanate of Oman Ministry of Fisheries Wealth is to ensure that fisheries are developed and managed for the advantage of the people of Oman in a manner that is sustainable and maintains biodiversity.

The ministry needed estimates of the fishable biomass of principal fish species off the Arabian Sea coast of Oman to guide development and investment decisions.

It hired a New Zealand-led consortium to conduct a series of fisheries surveys covering the key species in the area. The surveys focused on three broad groupings of fish:

NIWA staff led the development of the survey methodology and carried out the at-sea scientific and technical work with assistance from Omani staff.

The area surveyed is a major fisheries region for Oman. There is approximately 1200 km of Omani coast on the Arabian Sea, extending from Ra’s Al Hadd in the north to the Oman-Yemen border in the south. This area is characterised by significant shallow coastal waters, a moderate area of continental shelf, and a steep continental slope, which is very close to the coast in the south.

No comprehensive surveys since 1990

Surveys of demersal, small pelagic and mesopelagic fish were conducted between 1963 and 1990. The most extensive of these were from RV Dr Fridtjof Nansen (Norwegian Agency for International Development and FAO, 1975, 1976, 1983–84) and FRV Rastrelliger (in 1989–90). Clearly the Ministry of Fisheries Wealth needed much more up-to-date information on which to base its decisions.

Need to test whether catches were exceeding yields

Fisheries productivity in the region is heavily influenced by at least two seasonal factors:

The specific objectives of this project were:

Five seasonal surveys with an average duration of 47 days were completed in the project period using the RV Al Mustaqila 1. The surveys were timed to ensure coverage of the main seasons, with an overlap of one season, between August 2007 and September 2008.

The survey design and activities were focused on the three key resource groups: demersal fish, small pelagic fish, and mesopelagic fish. However, the survey activities were tightly integrated within each voyage to ensure appropriate data was obtained to address the full range of objectives.

Making best use of old data

The previous surveys (1963-1990) provided a good base for designing a new survey series for abundance and seasonal distribution with greater precision. We tried to ensure as much compatibility as possible between our surveys and the previous ones, so that we could evaluate any changes in fish abundance and distribution over the last two decades – at least where suitably informative data were available from the earlier surveys.

The survey vessel used is 45.2 metres long, and was equipped to carry out the required sampling, including bottom and mid-water trawling, acoustic surveys using scientific echo-sounders, and collection of oceanographic and bathymetric data.

During the five surveys, we completed a total of 238 days at sea, covering all the main seasons including the bi-annual monsoons that produce large seasonal variations in fish movement and catches.

While at sea, we:

Each survey lasted an average of 47 days, but that was just a fraction of the work involved in this project.

The full series of reports and technical appendices for Oman’s Ministry of Fisheries Wealth ran to over 1000 pages. The detailed contents are confidential to the client. The ministry is now using the data we collected, and the abundance estimates we made, to inform their fisheries management decisions.

During the surveys, we found more than 500 species of fish. Some of these species had not been recorded in Omani waters before, and some may be new to science. These species will be described by taxonomists in coming years.

In more detail, the surveys: 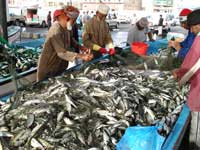