Once eels reach sexual maturity they begin their downstream migration. Where barriers such as hydroelectric dams are present, passage can be at best interrupted or blocked, but in most cases passage through the turbines results in serious injury or death.

Information on the timing of downstream migrating juveniles has been successfully used to reduce mortality for a variety of fish species at dams and other passage barriers. In cases where downstream migration can be predicted, implementing mitigation activities such as targeted netting, spillway opening, or bypass opening has resulted in reduced injury and mortality rates. However, predicting migration is difficult, especially in rivers whose flow patterns are regulated by storage and generation schedules.

When downstream migrant eels are confronted with a dam, studies have shown that they spend time searching along the headrace, presumably for an unobstructed pathway downstream. Eels that are unable to find a pathway have been shown to return upstream, often to the exact location where they were residing previously. Many migrants impinge or get stuck against the screens or enter station intakes, and are killed during passage through the turbines.

At present none of the hydro stations in New Zealand have been specifically equipped to protect the downstream eel migration. However, some retrofitting and mitigation activities have been implemented over the last ten years in an attempt to protect and/or safely pass migrants. Ceasing generation completely during major downstream migration events, whilst also providing permanent bypass facilities and protective measures at intakes, is the ultimate way of providing safe downstream passage for fish. The following section briefly describes some of the options available to operators and the community to facilitate the safe downstream passage of eels at hydroelectric dams, namely:

Ceasing or suspending hydrogeneration is the ultimate way of protecting downstream migrating fish. However, this solution is unlikely to be favoured by hydroelectric operators and their stakeholders as this may potentially influence the security of electricity supply. When large downstream migrations events occur at "off-peak" generation times (e.g., migrant eels migrating at night), trade-offs between the cost of lost generation and the cost of installing physical or behavioural deterrents may be able to be implemented on a case by case basis.

Actively (as opposed to natural events during very high rainfall) spilling water over a spillway is an alternative way to protect downstream migrants from turbine passage, but the spillway design must be suitable for the safe passage of migrant fishes. Many downstream migrants, such as juvenile lamprey and migrant eels, choose to move as river discharges increase and are therefore likely to be moving at times when spills may naturally occur. Overtopped or partially opened spillways may offer alternative routes to turbine passage under high flow conditions, where the proportion of flow being abstracted by turbines is small in comparison to total discharge.

Observations at Pātea Dam and Wairere Falls Power Station indicate that a significant number of migrant eels can pass safely over open spillways. Following spillway-opening mitigation trials at c. 80 m high Pātea Dam, over 110 migrant eel passed over the spillway with relatively little injury when it was opened by about 70 mm for 2.5 hours. In another trial, 10 migrants were collected in a one hour opening with the eels showing little sign of injury. Further observations at Wairere Falls Power Station indicated that a significant number of eels pass over the weir when it overtopped during periods of high flows. Once over the dam, migrant eels continue to swim downstream quickly, but if the flow is interrupted, they will stop and wait for the next high flow event, and become prone to capture by fishers.

From these observations it appears that either partially opening spillways or allowing weirs to be overtopped for at least two hours at night during migration peaks would allow a significant number to pass safely over the dam.

A number of techniques are being trialled to see if we can predict peaks in migration and detect congregations of migrants in front of intakes, including:

As the opening of a hydroelectric dam's spillway results in a fuel or production loss, such occasions may need to coincide with flood events, otherwise station operators may be reluctant to implement such a mitigation method for more than a few hours at a time, and certainly not at peak demand time.

Fish passing downstream through water turbines may be injured or killed. The extent of the injury can depend upon the type of turbine installed, the speed of turbine rotation, the species and physical shape of the fish. Small diameter, fast rotating, turbines are reported to cause the most damage to downstream migrating fish. A review of the problem in New Zealand concluded that the survival of large migrant eels (>800 mm) through turbines was likely to be nil.

Large, elongate fish such as adult eels are particularly vulnerable to damage as they pass through turbines. For adult eels, typical mortality values are between 15 and 30% for large low-head Kaplan turbines but can be 50 to 100% in the smaller turbines used in most small-scale hydropower developments. Fish-friendlier turbines have been developed but for most existing stations the only practical means of reducing the extent of injury and mortality is to discourage fish from entering the turbines.

Excluding fish from entering intakes is the most reliable means of protecting downstream migrants. Barrier nets have also been used as a temporary method of intake protection for migrant eels in New Zealand; however, they are not suitable for use at all facilities due to debris loading, manpower and maintenance requirements.

Physical deterrents such as trash screens, woven mesh screens, perforated plates and wedge wire screens have all been used at some facilities. Louvers orientated at an appropriate angle may also be used to divert fish at intakes. Each type of deterrent has different installation, cleaning and maintenance issues. Approach and through screen water velocities must be low enough to permit fish to have time to react and avoid impingement. Screens can also be angled to encourage fish to move into a more desirable area, such as an area where bypass facilities are installed.

Knowledge of fish behaviour can be exploited in the design of deterrents that discourage fish from entering danger areas, and/or attractants can be used to encourage them to enter a safer area. Behavioural deterrents do not create absolute fish barriers so will always be less effective than screens although potentially cheaper to install and maintain. To date, the main types of behavioural deterrents investigated include light, sound, water jets/bubble curtains and electric fields. Hybrid systems that combine behavioural deterrents have also been used at some installations. Although a variety of behavioural systems are in use at different sites around the world, the effectiveness of these technologies has been poorly recorded.

There are factors which are common to all migrant fish species that need to be taken into account when designing bypass routes that facilitate downstream passage. The first is that there are likely to be a large number of a particular species that are migrating and require passage at any one time. There is also a tendency for downstream migrants to move passively with the flow. For a bypass to be effective, a substantial portion of the flow should be diverted through the bypass.

Surface migrating fish will generally find a surface bypass on their own accord when turbine intakes are deeply submerged. The bypass entrance should be positioned close to where fish naturally congregate or can be guided to. In most situations this will be at the most downstream point of the barrier, but some studies have also demonstrated that eels may return upstream once encountering a dam and therefore there may be opportunities to place bypasses some distance upstream of the dam. Areas where recirculation occurs (e.g., eddies adjacent to trash screens) are ideal as generally this is where fish will tend to congregate. It may also be advisable to have more than one bypass entrance.

Bypasses tend to be preferred by hydroelectric operators in comparison to spilling as they use less water (in some cases the bypass flow can be fine screened and then used in a smaller turbine to further reduce potential losses). They are also held by some authors to be less stressful for fish than passing over a spillway.

Studies at Wairere Falls Power Station in New Zealand have shown that migrant eels found and used two 100 mm diameter surface bypass holes drilled side by side in the dam wall, approximately 0.6 m below the water surface. Two additional 150 mm entrances have been added since at this site and monitoring undertaken in 2008 indicated that 1,044 migrant eels used the bypasses that year.

In Europe and New Zealand, labour intensive trap and transfer programmes for downstream migrant eels have been initiated as mitigation measures at hydroelectric facilities. For example, at the Manapōuri Power Scheme fyke nets are deployed within Lake Manapōuri during the downstream eel migration season and migrants are transferred to downstream areas. In 2010–11 over 3,900 migrants (mostly females) have been transferred below the dams. Since 2001 a migrant trap and transfer operation has also been operating in the upper Waitaki catchment.

In other systems (e.g., Waikato hydro reservoirs), the enhanced eel population in the upstream catchment has been heavily fished, reducing the number reaching maturity and needing to migrate. Fishing operations minimise the loss of migrants in turbines and could result in a net increase in the number of migrants able to reach the sea if it coincided with a ban, or at least a significant reduction, in fishing that allowed eels in habitats with free access to the sea to grow and mature. A small diameter downstream bypass has been installed at the Wairere Falls Power Station on the Mōkau River. A 150 mm horizontal steel pipe carries fish from the bypass entrance to a stainless steel chute (pictured above) and over the natural rock falls to the river downstream. To date this relatively simple system has saved over 3,500 tuna heke from the turbines. Credit: Jacques Boubée 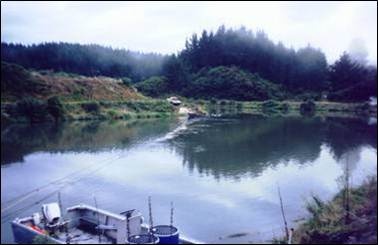 Barrier net deployed across the Aniwhenua Canal. Barrier nets have been used as a temporary method of protecting migrant eels from the intakes of hydroelectric dams, however, they are not suitable for use at all facilities due to debris loading, manpower and maintenance requirements. Credit: Jacques Boubée. A large migrant eel exits the bypass onto stainless steel chute at Wairere Falls Power Station. This photo is provided by the remote camera system that records the passage of migrant eels through the chute. Credit: King Country Energy and NIWA