Every year, a proportion of eels mature and migrate to sea to spawn.

Once eels become migrants (also known as tuna heke or tuna whakaheke) they stop feeding, and progressively develop the external features that clearly distinguish them from 'feeders'. These features include:

In addition, the pectoral fins and eyes enlarge and become surrounded by a narrow (sometimes bluish) ring.

Downstream migrations normally occur at night during the dark phases of the moon, and are often triggered by high rainfall and floods. During the migration to the oceanic spawning grounds, eels do not feed but instead rely upon stores of body fat to sustain them during the 6 month (or so) journey. There is a specific pattern in the sequence of seaward migrations with the smallest, shortfin males migrating during February and March, followed by shortfin females in March and April. Longfin males migrate during April, followed by longfin females from late April to June.

By the time they spawn, eels are thin and they die shortly afterwards. While it is possible to spawn eels in the laboratory by giving them injections of different hormones, rearing the delicate larvae through to the glass eel stage has only been achieved within the last few years: large-scale hatchery production of glass eels is still many years away.

Larger female eels are much more fecund (contain more eggs) than smaller female eels and are likely to make a greater reproductive contribution by producing a higher proportion of eggs for potential recruitment to New Zealand waters. However, female longfin eels are long-lived and take several decades to reach reproductive maturity. Until they reach maturity and migrate to sea, tuna (and particularly the females) are susceptible for a long period of time to fishing activities as well as mortality due to by non-fishing activities, such as drainage clearance and pollution events, and natural causes (e.g., predation, disease).

The level of egg production to ensure sufficient recruitment of eels is unknown. However, there are concerns about a decline in the number of large longfin female eels in the fishery and what impact this might have on spawning escapement.

What does escapement mean?

An assessment of the size and age structure of eel populations in the 1990s emphasises that the number of large (>700 mm) female longfin eels has significantly reduced in comparison to observations made prior to, or during, the 1970s. Additionally, the length frequency distributions of eels caught by commercial fishers in recent years throughout the country shows that fewer large eels are being caught.

When adults eels become sexually mature, they begin to change their physical appearance and some of their features, in preparation for travelling to and swimming in the ocean - a very different environment to freshwater.  Examples of these changes include: their fins and eyes get bigger (to make swimming in currents easier, and to have better vision in low light) and the belly becomes more silver (to make them less visible to predators swimming beneath them).  If they are unable to reach the sea due to, for example, being blocked by something, a migrant who has undergone these changes can either "change back" (and start eating again) or will start to waste away as they may have changed too much to continue to survive in freshwater.

Escapement - sexually mature migrants need to be able to get to the sea.  Thus, escapement is a fisheries term used to describe the stock surviving fishing pressures over a spawning cycle. In this case we use it to describe the number of eels "escaping" or travelling/swimming freely from pressures (like commercial fishers and hydroelectric dams) to get to the ocean and complete their life cycle. A tuna heke from the Mōkau River. Note the enlarged eye and pointed nose as it's body starts to change and get ready for it's long ocean journey. Credit: NIWA

This migrant shortfin male has been unable to migrate downstream due to the presence of a large instream structure. In some cases, like the tuna pictured, an eel can lose condition when migration is delayed. Credit: Jacques Boubée Location of archival pop-up tags ascent locations on four longfin eels tagged and released from south of Christchurch. The tags were programmed to release from each eel at a different time. Once the tags came up to the ocean surface they sent all of the data they had been collecting via satellite to NIWA scientists eagerly awaiting the results. Credit: Don Jellyman 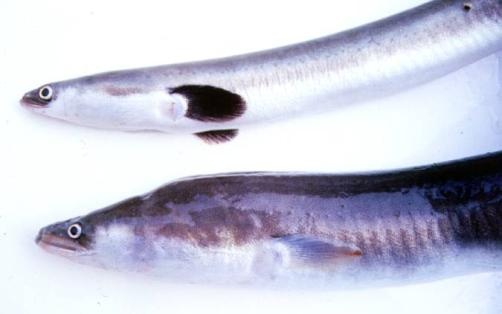