Predicting the future of global ozone Climate change is one problem, ozone depletion is another. True? Maybe not. New modelling techniques are helping to unravel the links between these two environmental issues, and to assess the implications of changes.

Perhaps the two most debated environmental issues in recent years have been climate change and ozone depletion. In the past these have usually been treated as two different and unconnected phenomena. However, recent research has revealed a range of processes that link them. Assessing the effects of these atmospheric interactions requires the use of sophisticated computer models of chemistry and climate. But, what are the links? How can ozone depletion affect climate change, and vice versa?

The illustration below shows how various climate and chemical processes affect each other. Gases such as carbon dioxide (CO2), methane (CH4), nitrous oxide (N2O), chlorofluorocarbons (CFCs) and even water vapour (H2O), trap the infrared radiation being emitted from the Earth’s surface, and warm the troposphere. This so-called greenhouse effect warms the surface to about 35°C more than it would be without these gases.

The concentration of ozone is highest in the stratosphere where it is formed (see Water & Atmosphere 3(1): 19–21) but exists throughout the atmosphere including the lower troposphere where it is a pollutant. (See Ozone highs and lows in Auckland, Water & Atmosphere 10(1).) As well as absorbing ultraviolet radiation, ozone also acts as a greenhouse gas. This means that recent decreases in ozone have partly offset the surface warming caused by increases in other greenhouse gases. 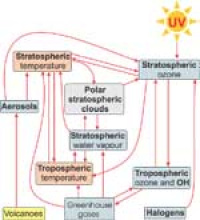 Diagram of the interactions between stratospheric ozone and other atmospheric constituents and processes.

Nevertheless, increases in greenhouse gases are expected to cause the troposphere to warm further, but because the outgoing radiation is preferentially absorbed in the troposphere, this causes the stratosphere to cool. Stratospheric chemistry and wind patterns are sensitive to temperature changes. For example, it is now known that the processes that destroy polar ozone depend on concentrations of halogens, but are also very temperature-sensitive. Temperature is important because polar stratospheric clouds (PSCs) will only form at around 195 K (–78°C) in the lower stratosphere.

Temperatures in Antarctica often fall below 195 K, but in the Arctic are usually close to this threshold. This means that even a very small cooling of the stratosphere caused by greenhouse gas increases could lead to a dramatic increase in the severity of Arctic ozone depletion.

Ozone depletion also occurs in the mid-latitudes of both hemispheres, though less dramatically than over the poles. The processes responsible for mid-latitude ozone depletion are not well understood but may also be sensitive to changes in stratospheric temperatures.

The discovery of the Antarctic ozone hole highlighted the importance of global monitoring of the stratosphere. The Network for the Detection of Stratospheric Change (NDSC) is now committed to monitoring changes in the stratosphere with an emphasis on the ozone layer. The NIWA site at Lauder, Central Otago, is the primary Southern Hemisphere mid-latitude site in the NDSC, while the NIWA site at Arrival Heights is one of the Antarctic primary NDSC sites. Both sites support a wide range of atmospheric measurements.

NDSC monitoring includes the study of ozone and its links to other aspects of atmospheric chemistry. The complexity of the system requires the use of sophisticated, coupled chemistry–climate models to assess the implications of these links. The UK Meteorological Office (UKMO) has developed such a model based on its so-called Unified Model. NIWA uses the latter in a number of research programmes. Recently a new NIWA/UKMO collaboration has been initiated to further develop the coupled chemistry–climate model. The goal is to understand how global ozone levels might be expected to change over the coming century as stratospheric halogen levels decrease and greenhouse gases increase.

Advancing our understanding of atmospheric processes, and subsequently reducing uncertainty in projected changes in ozone, can best be achieved through comparisons of model predictions and observations. This new project will include comparisons of measurements made within the NDSC and coupled chemistry–climate model outputs.

When will ozone recover?

The Montreal Protocol and its amendments have almost eliminated CFC emissions. Levels of most CFCs have started to decrease though some bromine-containing compounds continue to increase. In response, global ozone levels are expected to recover. The mid-latitudes of the Southern Hemisphere have been identified as one of the best locations to detect this recovery. However, it is still very uncertain when ozone recovery might begin. It has been suggested that depletion will continue even though halogen levels seem to have peaked. The reason is greenhouse gas-induced stratospheric cooling, as explained above.

Our measurements at Lauder, and the new chemistry–climate model, will help to determine how sensitive ozone recovery is to climate change. It will then be possible to check whether the global ozone layer is responding as expected to international regulations.

Teachers: this article can be used for Chemistry L8 A.O. 8.1 and Science Material World L8 A.O. 4. See other curriculum connections at www.niwa.co.nz/pubs/wa/resources

John Austin is based at the UK Meteorological Office and recently spent two months working at NIWA in Wellington and Lauder. Greg Bodeker and Hamish Struthers are based at NIWA in Lauder.

Halogens: gases containing fluorine, chlorine, bromine, or iodine which are highly reactive in the atmosphere in their radical forms.

Polar stratospheric clouds: clouds that form at very low temperatures in the polar stratosphere and which are a key prerequisite for ozone depletion.

Stratosphere: the region of the atmosphere between about 10 and 50 km, above the troposphere.

Troposphere: the part of the atmosphere closest to the Earth’s surface, extending up about 10 km. The temperature in the troposphere decreases steadily with increasing altitude.

December average total column ozone at 45°N and 45°S as simulated by the coupled chemistry–climate model.

To predict the future behaviour of atmospheric chemistry we construct numerical models describing the chemistry and transport of atmospheric constituents. The change in each chemical constituent in the atmosphere is described by an equation, which includes time, rates of production and loss, and wind velocity.

While this equation is simple in principle, its solution is complicated by the fact that both production and loss depend on temperature and involve other chemicals. The expression for wind velocity is best taken from a climate model.

Current climate models have a spatial resolution of at least 5° by 5°, with as many as 60 or more vertical levels if the stratosphere is to be treated adequately. The result is that coupled chemistry–climate models require massive computing resources.

It is only since the acquisition of the NIWA’s supercomputer, Kupe, that we have been able to join the handful of research teams around the world conducting such experiments.

To show how ozone levels over New Zealand may change, December average ozone levels at 45°S and 45°N have been extracted from a Unified Model simulation from 1979 to 2019. Although the results (top graph) show a slight recovery of ozone, the timing and magnitude are uncertain and highlight the need to develop the model further. At NIWA, preliminary runs with a refined version of the chemistry-climate model show a larger Antarctic ozone hole (lower graph). The results are in better agreement with measurements, and look promising for more accurate predictions in the future.