Monday 11th January: Voyage is underway as we pass abeam of Banks Peninsula heading south. The northerly wind that assisted our passage on departure has dropped away to be replaced by a strong southerly which slowed us down to 10 knots at times this morning, this is easing slowly. Had a look at the new incubators in the 10 foot container, a very impressive setup, and now no more sea water is being frozen to the decks as in the past.

Tue 12th: Flogged clocks last night [setting them back] to operate ship time on New Zealand Standard Time. All scientific records are based about NZST. Abeam the bottom of the South Island at 00:01 this morning. Emergency drill this afternoon, immersion suit fitting for all voyagers, orange penguins everywhere on-board for a short time. Passed latitude 50° S at 16:00 this afternoon.

Wed 13th: Abeam Campbell Island this morning at 09:00 NZST at 240 miles west of us. Hull Integrity drill this morning after a general alarm and muster. Drills are held daily en-route to the Antarctic. This is to better acclimatise all voyagers to the environment (cold) and prepare for any possible emergency situations that could arise. We are a long way from the nearest fire department.

Thu 14th: Cleared 55° 30’S early this morning and deployed our first Argo buoy, ID# 8909. At midnight when we arrived on watch it was still twilight, not really dark, and the sun rose above the horizon at 04:00 NZST Fri 15th: Settling into watch routines. Entered into the Antarctic area below 60° S early this morning, outside air temperature 3.3°C and sea temperature 4.5°C. Commenced water sampling and plankton tows today and “Neptune” arrived on-board to welcome all the newbie voyagers into the polar region. Argo, Drifter and Defence buoys deployed at numerous sites as we travel southwards. 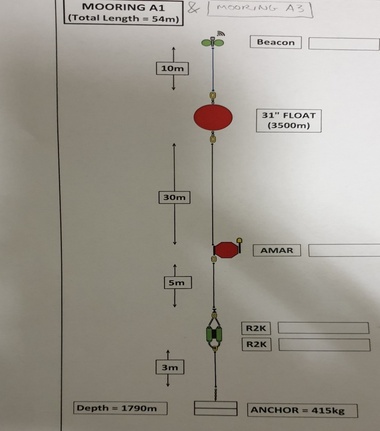 Sat 16th: First iceberg sighted this morning, followed by several more bergs in the next few hours, we have finally arrived in the Antarctic in perfect conditions to commence our required scientific daily routines.

Deployed the mid-water sampling trawl on fish marks in 80 metres and sampled successfully. This was followed by a cast of the CTD rosette for seawater from depth for on-board incubation experiments.

The Passive Acoustic Mooring was retrieved this morning despite the loss of the uppermost beacon buoy. The skill of the 1st officer and crew managed to retrieve the floating system with hazardous lines off the damaged mooring system without mishap. This mooring was renewed in the same position with the intention of retrieval in 2023.

Mon 18th: Arrived in the vicinity of Scott Island early this morning. A single target ID trawl on a layer close to the bottom was undertaken. The final southwards Argo buoy was deployed. Retrieved the first mooring array just before noon. Several attempts were made to grapple for the 2018 mooring that was unable to be retrieved in 2019. It was easily spotted on the sounder but it avoided our attempts to retrieve it, so we abandoned our task and the mooring remains secure to the bottom for another two years.

Tue 19th: Moving eastwards to attempt to enter into the Ross Sea at 69°S, 175°W where a stretch of open water is available to allow entry.

At 00:00 this morning we came across an extremely large tabular iceberg. It was easily picked up on the ship’s radar but due to the foggy conditions was only visible at a range of 1.7 miles. We are continuing to move eastwards with more icebergs, growlers & bergy bits in the water but still relatively clear of ice.