Seamounts, knolls, and hills are prominent features of underwater topography in the New Zealand region and are often sites of high biodiversity and productivity. They are the focus of important commercial fisheries for deepwater species, with about 80% of known seamount features at suitable depths for deepwater fisheries having been exploited.

Benthic faunal communities on deepwater seamount features are commonly characterised by extensive growth of cold-water corals. These are vulnerable to impacts from bottom trawl gear, and substantial reductions in the biogenic habitat formed by corals have been recorded on fished seamount features. However, the overall resilience of such benthic communities, and the time frame required for recolonisation and regrowth is uncertain, yet such information is important for evaluating appropriate options for management of fishing.

On the Chatham Rise there are groups of small seamounts in close geographic proximity, of a broadly similar size, depth range, and elevation, and with varying levels of historical fishing effort. Two such groups are the “Graveyard Seamounts” on the northwest Chatham Rise, and the “Andes Seamounts” on the eastern margin of the Chatham Rise (Figure 1). A number of these features were closed to bottom trawling in 2001. The Graveyard seamounts in particular provide an opportunity to maintain a long-term monitoring study to determine the mechanisms and rates of recovery of benthic fauna, population connectivity, and linkages between proximate seamounts, as this area was surveyed in 2001, 2006, 2009, and 2015. Analysis of this 4-survey time series has shown little evidence of resilience of the benthic community, nor signs of settlement or recruitment of the main coral species. However, work off Hawaii indicates that measurable changes might be expected in the order of 2‒3 decades, a time approaching with the Graveyard series. Hence the time series was funded to continue.

These extended to the Andes seamounts as time and weather conditions permitted:

The voyage report is available in PDF format below. 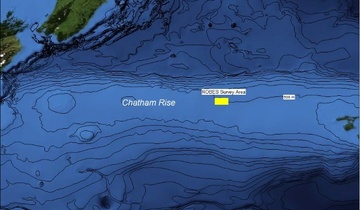