The sounds of whales and dolphins rarely seen in New Zealand waters have been recorded by a NIWA scientist in a pioneering underwater sound project.

Last year NIWA marine ecologist Dr Kim Goetz led a programme to deploy seven acoustic moorings in Cook Strait that recorded the sounds of marine mammals for six months until they were retrieved in December.

“More than half the world’s whale and dolphin species are found in New Zealand waters, yet very little is known about their migration paths, their behaviour and where they go,” Dr Goetz says.

However, results from a preliminary investigation of the data revealed some exciting findings. Among more common whale species, the passive acoustic devices recorded vocalisations from Antarctic blue whales, Antarctic minke whales and several different beaked whale species that are rarely seen due to their extensive diving behaviour. These are likely to be the first recordings of Gray’s and strap-toothed beaked whales in New Zealand waters.

Dr Goetz said the project set out to look at what sounds could be heard in the waters of Cook Strait, in particular the man-made noise from vessels and industry, natural noise such as weather events and biological contributors such as whales and dolphins.

“One of the interesting things we found was that vessel noise could be heard over a broader region in deep waters than in more enclosed shallower waters—you hear the sound for longer and it radiates over a wider area. However, in Queen Charlotte Sound, the shallowest recording location where the localised contribution of vessels was substantially higher, the vessel noise at greater distances from the recorder was less due to the shallow and restricted propagation environment.”

The analysis has also been able to match very quiet days to massive storm systems that greatly reduced vessel traffic.

Then there are the whales

“Antarctic blues are coming into New Zealand waters. They have a very low frequency call so are being picked up further away but we’re really confident it’s not as far away as Antarctica.”

Dr Goetz says the data so far show that Cook Strait may be segregating different whale populations with Antarctic blues primarily heard on the east side.

“We have also picked up Antarctic minkes—it matches the time minkes are known to go into Australian waters but they have never been acoustically recorded here before.”

But it is the beaked whale sounds that Dr Goetz is most excited about. There are 22 species of beaked whales, of which 13 can be found around New Zealand. The hydrophones have detected several beaked whale calls, including Cuviers, and possibly strapped-tooth and Gray’s beaked whales.

Matching sounds to species is tricky

“There is just nothing known about these animals—they are very elusive, deep diving animals which can spend over an hour on a single dive and surface for a very short time so they are not often documented,” Dr Goetz says.

Cuvier’s beaked whales were recorded at all mooring locations, even in Queen Charlotte Sound.

“The tricky thing with vocalisations is linking the sounds with the right species—if you don’t know what an animal sounds like you can’t say what it is.”

Combining future acoustic and visual surveys may be one way of solving that issue.

The moorings also happened to be deployed during November’s 7.8Mw earthquake centred off Kaikoura. The noise of the earthquake was so loud, it was outside the sensitivity range of the hydrophones.

They have, however, recorded the sounds made by large groups of fish communicating with each other, known as fish chorusing. These sounds play an important role in the behavioural functions of fish species. Dr Goetz says the long term aim of her research is to assist the consent process for activities in the Cook Strait.

“Essentially we have just scratched the surface and have so much to learn. A lot of the value of this lies in having a long term data set and being able to determine monthly, annual and seasonal patterns.

“Right now we don’t know what’s in the area and that uncertainty makes getting resource consent difficult. If we can determine what species are there and when, industry can operate in a manner that accommodates species presence, so it’s a win-win in my eye.”

Cook Strait is known for its high flow and many deepwater canyons close to shore, which Dr Goetz says, makes it a unique environment that is likely to attract a lot of animals.

“The baseline information we are getting from our acoustic moorings is far more than I anticipated, both in quantity and quality; it has been very successful for an acoustic monitoring project that has never been done before at this scale and in this kind of environment within NZ waters.”

Extra staff are being employed to help underwater acoustic company JASCO Applied Sciences process the massive amounts of data produced, and the moorings have been redeployed. They will be retrieved in August.

“The amount of detail we have got and the picture it paints is very exciting.”

Dr Goetz’s project has been supported by OMV group, Chevron and the Marlborough District Council. 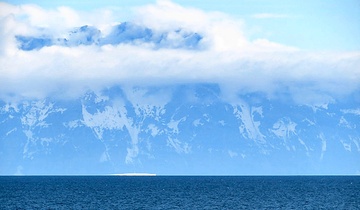 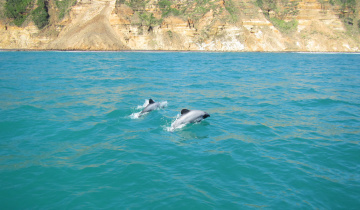