NIWA meteorologists are keeping an eye on an unusual atmospheric phenomenon that is amassing in the polar stratosphere.

Called a Sudden Stratospheric Warming (SSW), it occurs when the temperature of the stratosphere (30-50km above ground) over the South Pole rises by more than 25ᵒC. NIWA’s Ben Noll says this looks likely to occur next week.

“These events are rare in the Southern Hemisphere. There have only been two in New Zealand in recorded times: one in September 2002 and the other in September 2010.

“SSWs are much more common in the Northern Hemisphere. This is partly because of differences in the distributions of mountains, land, and sea, which help to drive temperature contrasts. These contrasts cause the formation of major planetary waves that help set SSWs into motion. “

Mr Noll says that during a major SSW the winds in the stratosphere reverse from westerly to easterly. A major SSW occurred in the Northern Hemisphere in February 2018 and was dubbed the “Beast from the East”. It was associated with a series of strong cold waves across Europe.

In the Southern Hemisphere during winter, a ring of stormy and freezing weather encircles Antarctica. Known as the polar vortex, it is usually very good at keeping harsh, wintry conditions locked up close to the pole. When a SSW occurs, it can help to weaken or displace the polar vortex in the stratosphere, which then filters down onto the tropospheric polar vortex and influences our weather patterns.

“For up to about a month after the SSW, polar air masses, known as streamers, can break off from the weakened vortex and move towards New Zealand. It doesn’t guarantee unusual or extreme weather, but it can happen,” Mr Noll says.

After the SSW in 2002 New Zealand experienced its coldest October in 20 years with below average temperatures covering much of the country and frequent ground frosts. In 2010 – which is classed as minor event – a number of rainfall records were broken with well below normal sunshine and very cold temperatures in parts of the South Island.

Plenty of unsettled weather is signalled for New Zealand in September and October with frequent chilly spells.

Mr Noll says next week the weather will feature cool conditions for the time of year and the potential for an active spell of weather late in the week bringing rain, snow, and wind.

The SSW is likely to peak between Thursday 29 August and Monday 2 September. 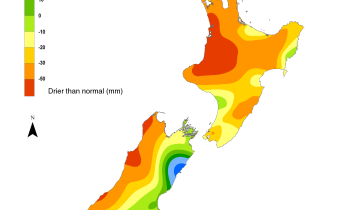