The atmosphere is comprised of layers based on temperature. These layers are the troposphere, stratosphere, mesosphere and thermosphere. A further region at about 500 km above the Earth's surface is called the exosphere.

The different layers of the atmosphere

The atmosphere can be divided into layers based on its temperature, as shown in the figure below. These layers are the troposphere, the stratosphere, the mesosphere and the thermosphere. A further region, beginning about 500 km above the Earth's surface, is called the exosphere.

The troposphere contains about 75% of all of the air in the atmosphere, and almost all of the water vapour (which forms clouds and rain). The decrease in temperature with height is a result of the decreasing pressure. If a parcel of air moves upwards it expands (because of the lower pressure). When air expands it cools. So air higher up is cooler than air lower down.

The lowest part of the troposphere is called the boundary layer.  This is where the air motion is determined by the properties of the Earth's surface.  Turbulence is generated as the wind blows over the Earth's surface, and by thermals rising from the land as it is heated by the sun.  This turbulence redistributes heat and moisture within the boundary layer, as well as pollutants and other constituents of the atmosphere.

The top of the troposphere is called the tropopause. This is lowest at the poles, where it is about 7 - 10 km above the Earth's surface. It is highest (about 17 - 18 km) near the equator.

This extends upwards from the tropopause to about 50 km. It contains much of the ozone in the atmosphere. The increase in temperature with height occurs because of absorption of ultraviolet (UV) radiation from the sun by this ozone. Temperatures in the stratosphere are highest over the summer pole, and lowest over the winter pole.

By absorbing dangerous UV radiation, the ozone in the stratosphere protects us from skin cancer and other health damage. However chemicals (called CFCs or freons, and halons) which were once used in refrigerators, spray cans and fire extinguishers  have reduced the amount of ozone in the stratosphere, particularly at polar latitudes, leading to the so-called "Antarctic ozone hole".

Now humans have stopped making most of the harmful CFCs we expect the ozone hole will eventually recover over the 21st century, but this is a slow process.

The region above the stratosphere is called the mesosphere. Here the temperature again decreases with height, reaching a minimum of about -90°C at the "mesopause".

The Thermosphere and Ionosphere

The thermosphere lies above the mesopause, and is a region in which temperatures again increase with height. This temperature increase is caused by the absorption of energetic ultraviolet and X-Ray radiation from the sun.

The region of the atmosphere above about 80 km is also caused the "ionosphere", since the energetic solar radiation knocks electrons off molecules and atoms, turning them into "ions" with a positive charge. The temperature of the thermosphere varies between night and day and between the seasons, as do the numbers of ions and electrons which are present. The ionosphere reflects and absorbs radio waves, allowing us to receive shortwave radio broadcasts in New Zealand from other parts of the world.

The region above about 500 km is called the exosphere. It contains mainly oxygen and hydrogen atoms, but there are so few of them that they rarely collide - they follow "ballistic" trajectories under the influence of gravity, and some of them escape right out into space.

The earth behaves like a huge magnet. It traps electrons (negative charge) and protons (positive), concentrating them in two bands about 3,000 and 16,000 km above the globe - the Van Allen "radiation" belts. This outer region surrounding the earth, where charged particles spiral along the magnetic field lines, is called the magnetosphere.

Read about our UV and ozone research 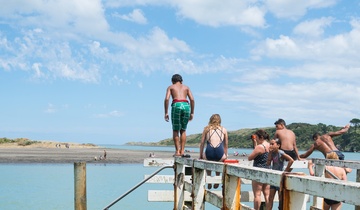 Helping you understand the science of climate change. The things we can do to combat climate change, individually, and alongside our whānau, school and community, can and will make a difference. Technicians release a balloon at Lauder. Chemical sensors attached will measure the vertical ozone profile up to an altitude of around 35 kilometres before descending. [Dave Hansford]