An estuary is a partially enclosed body of water formed where freshwater from the land meets and mixes with saltwater from the ocean.

We have numerous articles on this website about specific aspects of estuaries - simply use the website search function to find them.

What is an estuary?

Why are estuaries valuable?

What is an estuary?

Estuaries come in all shapes and sizes and can be called bays, lagoons, harbours, inlets, sounds, wetlands and swamps.

How estuaries are formed

Bar-built estuaries form when a shallow lagoon or bay is protected from the ocean by a sand bar, sand delta or barrier island. Examples of these are found along the west coast of the North Island, eastern Coromandel and the Avon Heathcoate Estuary in Christchurch.

Tectonic estuaries are caused by the folding or faulting of land surfaces. These estuaries are found along major fault lines, like the Manukau Harbour in Auckland.

Coastal lain estuaries are formed by the sea level rising and filling an existing river valley. Examples of this are the Okura estuary, North Auckland.

Fjords and rias are U-shaped valleys formed by glacial action. Fjords are found in areas with long histories of glacier activity, seen along the west coast of the South Island. A fjord has a sill and a ria does not.

estuaries enclose a diverse range of habitats from subtidal areas to intertidal areas. These include:

Mangroves provide coastal protection, stabilize mudflats and provide important habitats for a range of animals. They are on of the worlds most productive vegetation types. The leaves they shed form a nutrient compost providing a valuable food source for many organisms. Mangrove communities include shellfish, worms, crabs, shrimp and other crustaceans living on and in the sediment around the trees. Barnacles, snails and oysters live on the trunks and aerial roots and spiders , insects and birds live amongst the leaves and branches. Mangroves are one of the starting points in estuarine food webs. Mangroves have become protected habitats in many countries including New Zealand showing a change in people’s perception.

Nutrients are taken up by plants or recycled by sediments. Nutrients are controlled by inputs from land, plant biomass and tidal flow. Estuaries are important sites of nutrient recycling in the coastal environment. Estuaries have a continuous source of nutrients from their freshwater inputs. These freshwater inputs often have additional nutrients compared to the natural situation because they receive wastes from cities towns and farms. The balance of nutrients in an estuary depends on the amount of input from the land, how much is taken up by plants or re-cycled in the sediments within the estuary and how much is exported or imported to and from the ocean in the tidal water.

Some nutrients are essential to support the productivity of estuaries. Too many nutrients however, can alter the balance of nutrient cycling and lead to undesirable plant growths such as blooms of phytoplankton or seaweeds.

Plants are grazed and filtered by invertebrates like snails, cockles and oysters. These are eaten by juvenile and other small fish which may be hunted by larger fish like snapper, kingfish. rays and even sharks.

Why are estuaries valuable? These guidelines outline a recommended minimum set of methods for a community group interested in following habitat changes in an estuary. 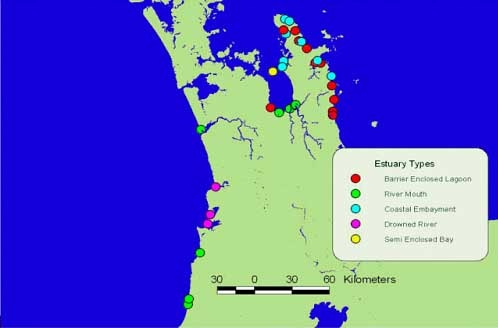 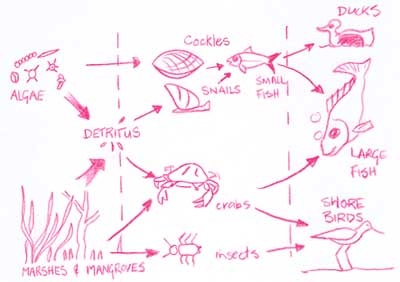