Common questions about clouds, how they are formed and how they behave.

What is a cloud?

A cloud is like the steam in your bathroom, or the fog you might sometimes walk through – it is a parcel of air with a whole lot of very tiny droplets of water in it, just suspended in the air. It is mainly air, because the droplets are really tiny and far apart, usually ten of them side by side would only be as wide as one human hair. Even although there might be anything from 50 to 250 droplets in a cubic centimetre (that’s a space about the size of the end of your finger) the distance from one droplet to the next could be 1000 times more than the width of a droplet. The droplets are so small they do not fall, unless by chance two or more get thrown together in the cloud and combine to form a heavier drop. If they do this, and start to fall, they are quite likely to sweep up other droplets underneath them and grow bigger and bigger and fall faster and faster, until they can fall out of the cloud as a raindrop.

A cloud is formed when warm, moist air rises and cools. Why? The air always contains some moisture (think about where the water goes to when the washing on the line dries.) When the sun comes out and it is warm, puddles, rivers, the sea all evaporate, and moisture from them goes into the air. Cool air can hold less moisture than warm air. So if warm air with lots of moisture in it cools down, the moisture forms little cloud droplets in the air. Air cools as it rises. This is because higher in the atmosphere the pressure is less so the air expands and air cools as it expands. So if moist air rises in the atmosphere, some of the water vapour in rising air condenses forming the tiny cloud droplets.

The shape and appearance of the cloud depends on the shape of the rising parcel of air. If it is a ‘puff’ of rising air the cloud might look like a small white puffy cloud, called a ‘fair-weather cumulus cloud.’ If it is a puff that then sucks more and more air up after it into the cloud (check the links below to see how and why this might happen), the cloud grows much larger and may turn into a towering thunderstorm. If the air rises because it is being pushed up over a range of hills the cloud may look long and smooth, called a lenticular cloud. These often form over the Tararua ranges, between Wellington and the Wairarapa, and also over Canterbury where it is called the nor-west arch cloud.

Why are some clouds grey and some white?

Small white cumulus clouds (fair weather) clouds do not have much water in them, so there is not much to stop sunlight from passing through them and making them look white. Dark grey rain clouds have lots of water in them and block or absorb the sunlight that falls on them. They also tend to cover the sky, so there is very little chance for sunlight to be reflected off the sides of them.

Why do clouds move?

Clouds move because the wind is carrying the parcel of cloudy air along. Wind occurs at all levels of the atmosphere from the ground up to higher than a jumbo jet can fly. Sometimes there can be no wind on the ground, but cirrus clouds very high up can be seen moving because of the wind where they are. Some clouds, like the lenticular clouds that form over hills, are stationary even when the wind is strong. (Actually we get fooled into thinking nothing is moving. The droplets in the cloud are moving fast with the wind, but new cloud drops are always forming in the same place where the air is pushed up near the hill, so the front of the cloud appears stationary. At the back of the cloud where the air comes down again away from the hill, the drops are evaporating back to vapour, so the back of the cloud seems to be stationary too.) 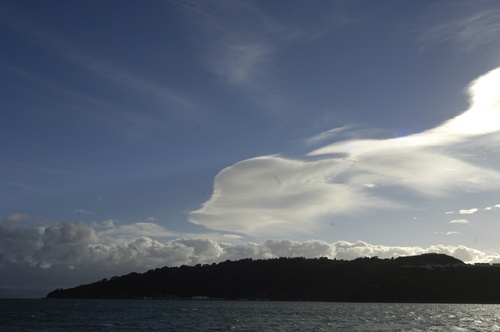