A glossary of common climate change and meteorological terms.

Departure from normal, difference from the average.

An area of high pressure around which the winds circulate anti–clockwise in the Southern Hemisphere. Also called a 'high'.

The season March, April, May in the Southern Hemisphere. This season is characterised by decreasing temperatures in most areas of New Zealand.

The pressure exerted by the atmosphere at a given point. It can be thought of as the weight of air in the column above you. Its is normally measured in inches of mercury, millibars, or hectopascals. It is measured with a barometer.

The historical record and description of average weather in a region or place. Statistics are normally derived from several decades' worth of data. The word is derived from the Greek word klima, meaning inclination, in reference to the position and angle of sun.

The Earth's climate has exhibited marked "natural" climate changes, with time scales varying from many millions of years down to a few years. The larger climate changes, such as the onset and recession of the Great Ice Ages, has been due to changes in the earth's orbit and the tilt of its axis, which caused systematic variations in the amount and distribution of solar radiation, and changes in circulation and overturning in the oceans and atmosphere. Over periods of a few years, fluctuations in global surface temperatures of a few tenths of a degree are common. These smaller changes are influenced by factors such as volcanic eruptions, and the El Niño–Southern Oscillation pattern.

The study of climate.

An area of low pressure around which the winds circulate clockwise in the Southern Hemisphere. Also called a 'low'.

The temperature to which air must be cooled for condensation to take place.

A drought is a prolonged period of low rainfall so that soil moisture is insufficient for sustained plant growth. It can take from two weeks to three months with insufficient rainfall before this criterion is met, depending on the time of the year.

If extra amounts of greenhouse gases (e.g. carbon dioxide, methane, CFCs) are added into the atmosphere, such as that from human activities, the natural greenhouse effect is increased, with extra warming occurring in the lower atmosphere.

The total amount of water that is transferred from the earth's surface to the atmosphere, mainly through evaporation of liquid water, and transpiration by plants.

Global warming refers to an overall increase in the Earth’s surface temperature which over time changes global climate patterns. Global warming due to natural influences has occurred in the past, but the term is more often used to refer to the warming that is occurring and is expected to continue as a result of increased emissions of greenhouse gases.

The overall warming of the Earth’s lower atmosphere mainly due to carbon dioxide and water vapour which permit the sun's rays to heat the earth, but then restrict some heat–energy from escaping back into space.

A period of abnormally warm weather in mid to late autumn.

The Intergovernmental Panel on Climate Change, established in 1988 by the WMO and the United Nations, to report on scientific and technical aspects of climate change.

The line drawn on a weather map connecting points of equal barometric pressure.

The region on the lee side (sheltered side) of a mountain range where rainfall is much less than on the windward side. For example, Canterbury lies in the lee of the Southern Alps.

An elongated area of high atmospheric pressure that is associated with an anticyclone. Sometimes referred to as a 'ridge of high pressure'.

The temperature of the water's surface. It is usually measured using buoys, ship data, and satellites.

Frozen precipitation in the form of translucent ice crystals in a complex branched hexagonal form.

A periodic reversal of the pressure pattern (position of highs and lows) across the tropical Pacific Ocean, associated with the El Niño and La Niña climate pattern.

An index used to monitor the state of the Southern Oscillation. Normally, the SOI is calculated from the standardised monthly mean pressure at Tahiti and Darwin. These two stations give a good approximation of the pressure pattern across the Pacific Ocean on the longer time frames of a month or more.

The season September, October, November in the Southern Hemisphere. This season is characterised by enhanced westerly winds over New Zealand.

At present this refers to the period 1961–1990. In the year 2001, the standard 30-year normal period will roll over to 1971–2000, and so on. A standard 'normal' period is chosen to ensure that calculations of climate averages (the 'normals') are calculated on a consistent period. A 30-year period is considered long enough to calculate a representative average, and to reduce the impact that one-off, very extreme events (i.e. short term climate variability) have on the average. The most recent 30-year period is always used.

Storms are associated with periods of strong often damaging winds, heavy flood-producing rainfall, thunder and lightning, heavy snowfall or blizzard conditions. They are classified by how strong the winds are or by how heavy the rainfall, lightning or snow are.

The season December, January, February in the Southern Hemisphere. This season is characterised by an increase in temperatures to the late summer maximum in many places in New Zealand.

The temperature of the ambient air at the surface of the earth. This is usually measured in degrees Celsius in New Zealand, and is measured by a thermometer. The thermometer is normally housed in a wooden louvered screen called a Stevenson screen, at a height of approximately 1.3 metres above ground level. This screen allows air to flow through the thermometer enclosure, so that a representative temperature reading is made.

A tornado is a violently spinning funnel of air descending from a cloud. It is made visible by the dust that is sucked up and also from the condensation of water droplets in the centre of the funnel.

Air that originates in the tropics or subtropics. When a tropical air mass lies over the country, it is often very warm and humid.

An intense storm that originates in the tropics, forming in a single, warm airmass. It has a very low central pressure, an 'eye' (the area with the lowest pressure, and relatively calm winds), and an 'eye–wall'(a ring of very active thunderstorms around the eye). When the winds around the tropical cyclone reach gale force (greater than 34 knots), the storm is named.

An elongated area of low atmospheric pressure that is associated with a cyclone, or low. Sometimes referred to as a 'trough of low pressure'.

Also called the hydrological cycle, it is the vertical transport of water in all its states between the earth, atmosphere and the oceans.

The state of the atmosphere at a specific time. It is the short-term variations in the atmosphere, as opposed to the long-term, climatic changes. It is usually referenced to in terms of sunshine, cloudiness, humidity, rainfall, temperature, wind, and visibility.

Air that flows around pressure systems such as highs and lows, or due to heating and cooling of land and sea (the sea breeze, the land breeze). Measured by its speed, and direction. Winds are called by the direction on the compass they blow from i.e northerly winds blow from the north.

The season June, July, August in the Southern Hemisphere. This season is the coldest season in most places in New Zealand. 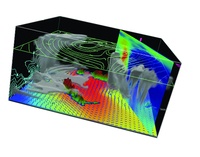