Researchers in New Zealand, and around the world, are beginning to understand the different ways our communities will be impacted by climate change. Some of the impacts are already clear, for example, sea-level rise and coastal erosion. Others are not so clear. It’s important for us to look into the future so we can best prepare ourselves to respond to potential impacts.

In the following video, NIWA forecaster Nava Fedaeff provides a weather report as if the year is 2050. This is only a possible scenario and not a true forecast. Nevertheless, it is based on the most up-to-date climate science, and attempts to paint a compelling picture of what life could be like on a warmer planet.

The health of many New Zealanders will be affected by a changing climate.

Hotter temperatures and heatwaves may bring health issues for vulnerable groups, particularly the elderly and babies, as well as outdoor workers.

A warming climate may increase the likelihood of tropical diseases, such as dengue fever and malaria, reaching New Zealand. New Zealand is currently too cold for most of the mosquitoes and ticks that spread tropical diseases, however, as our climate warms they may be able to establish populations here.

We can also expect climate change to have a negative effect on many people’s mental health. Some are already anxious about climate change and as impacts become more severe, anxieties may worsen.

Māori communities will be impacted and because many live close to the coast, infrastructure, as well as tapu places like burial grounds, are particularly at risk from sea-level rise and coastal erosion.

Ecosystems are interconnected communities of different species (such as specific types of plants and animals). When one species is affected by a changing environment, all species within the ecosystem are likely to be affected.

For many species, climate change will affect their ‘range’—the habitat in which they can comfortably live—and some species may be forced to move to find suitable habitats.

We are still learning about the ways New Zealand’s ecosystems will be impacted by a changing climate. This section will explore some of the possible impacts in several New Zealand environments. NIWA’s End of Summer Snowline Survey has documented the retreat of New Zealand’s glaciers and snowlines. As New Zealand’s climate continues to warm, the amount of snow and ice on our mountains will continue to decrease. [Photo: Dave Allen, NIWA]
Species living in alpine ecosystems, such as lizards and insects, have adapted to survive in cold and often freezing environments. Continued warming will cause snowlines to move upslope and we expect species living in these environments to also move upslope. This may cause a habitat ‘squeeze’ on alpine ecosystems.

We can also expect more pressure on alpine ecosystems from pest species such as rats and hedgehogs as warmer temperatures allow them to survive at higher elevations.

Our coasts and marine environments will face a range of challenges. Ocean acidification is one major process that will impact the balance of life in our oceans. Our oceans absorb more than a quarter of the CO2 released into the atmosphere from human activities. This process causes oceans to become more acidic. Species that grow calcium carbonate shells – like plankton, molluscs and crustaceans—struggle to grow and maintain their shells when ocean waters become too acidic.

Rising seas and coastal erosion will impact all coastal species. These processes will create a habitat ‘squeeze’ between coastal ecosystems and developed land.

Finally, warmer waters and changing currents will impact oceanic productivity and the abundance of prey species like krill and plankton. These animals form the base of the food web so changes to them will have flow on effects for all other species. Warmer waters around New Zealand may also encourage more invasive species and diseases to establish here and spread.

Read more about climate change and the oceans.

We’re still learning how freshwater environments will be impacted by climate change. We do know that water in our rivers, lakes, estuaries and wetlands will become warmer as air temperature increases. Warmer water temperatures will likely impact the range of many species, as well as nutrient cycling and primary productivity. Like with marine waters, as freshwater environments warm, we might see proliferation of invasive species such as water hyacinth.

Changes in rainfall and snow and ice cover will also impact the amount and seasonal timing of water entering and exiting freshwater environments. Finally, changing wind and temperature patterns may increase the likelihood of algal blooms in lakes. Many native birds and insects living in on land will be affected by climate change. Warming temperatures will likely make New Zealand a more suitable habitat for invasive flora and fauna. Invasive species from warmer climates may 'outcompete' native species Subtropical plant species like bangalow palm currently only grow in northern New Zealand, but they could spread southwards as the climate warms.

The timing of seasonal activities like flowering, breeding, growth and migration may alter as the climate changes, disrupting relationships between species.

Warmer and drier winters in parts of the country are already observed to extend the breeding seasons of some mammalian predators (e.g. rats, mice, goats, pigs and possums). As the climate warms, we may see more of these predators surviving the winter months.

Increasing drought severity over much of the country, but particularly in the east and north of the North Island, is likely to place pressure on native forests and the animals which live there. For instance, evidence suggests that kiwi may have trouble penetrating hard ground with their beaks to find insects during droughts. Droughts are also likely to effect wetland ecosystems.

The primary sector makes up a large part of New Zealand's economy. Primary industries produce natural goods like dairy, meat, fruit and wine. Because these industries are susceptible to large changes in temperatures and rainfall, they will be affected by a changing climate.

Primary industries will be at risk from more frequent extreme weather events. Drought negatively impacts the productivity of the land and will present challenges to many industries including farming and fruit-growing, particularly in the far north and east of the country. Larger amounts of water may be needed to irrigate these areas. Flooding will also be a challenge for industries near rivers or in areas experiencing high amounts of rainfall.

Warmer temperatures may increase the risk of pest diseases and species. Potential invasive species, like the Queensland fruit fly, may be able to live in wider parts of New Zealand as our climate warms, increasing the risk of outbreak and contamination.

There will be increasing effects on the aquaculture and fisheries industries. For instance, salmon farms may have to move out of Marlborough Sounds to cooler parts of the ocean, while new pest species or diseases may move to warming waters.

NIWA's annual end of summer snowline survey has shown that over the past few decades our snowlines have advanced higher up our glaciers, which is associated with reductions in glacial ice volume.
Future climate projections show a potential reduction in snow days and warmer temperatures at high altitudes. This may present challenges to the ski industry. Many ski fields will likely look to create more artificial snow to help offset snow losses.

Many ski fields are also diversifying their business and increasing revenue by operating chair lifts in summer for hikers and mountain bikers. Many glacier tourism operators are no longer able to hike to the glaciers they visit, they are required to helicopter in visitors.

Two thirds of New Zealanders live within 5 km of the coast, so sea-level rise will directly affect many of us.
Sea-level rise is caused by melting of the polar ice caps, as well as expansion of ocean water as it warms. In New Zealand, the sea may rise by up to a metre by the end of the century. This will mean more coastal erosion and flooding, which will damage homes and infrastructure like pipes and roads.

Increased rainfall will pose a challenge for stormwater networks. Many of our drainage networks will need to be upgraded and expanded to manage projected higher storm water flows to avoid flooding.

Bridges and roads are at risk from both high intensity rainfall and flood events, which are likely to happen more often as the climate changes.

Should we rebuild damaged infrastructure in the same location? Or should we think about new travel routes? These are questions we will have to answer in the future.

We will also have to think about our water supplies, but not only during dry periods.

In March 2017, a huge storm called 'The Tasman Tempest' descended on Auckland. Unprecedented amounts of rain fell on the Hunua Ranges causing massive slips into water reservoirs, contaminating drinking water with silt. Water restrictions were put in place and water managers realised that they would have to plan for similar events in the future.

As parts of the country become drier, people will have to think about how they can store or access water.

We are already seeing the effect of a warming climate on New Zealand mountains. Warmer temperatures are causing snowlines to advance further upslope and glaciers to retreat. In the future, our mountains may be rockier with less snow cover.

In the past, New Zealanders have built houses and infrastructure very close to the coast. Sea-level rise and storm surges cause coastal erosion which takes sand away from beaches. We are already seeing the impact this process has on coastal developments. Communities will have to decide whether to fortify the coast with structures like seawalls and groynes, or retreat and build further back from the coast. 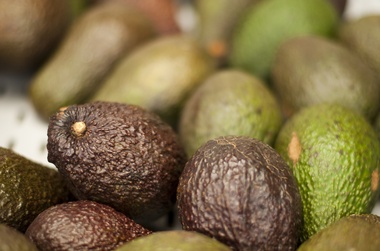 Climate change presents many opportunities for New Zealand. As our climate warms, valuable crops like avocados may be grown in areas that were previously too cold and unsuitable for growth. [Photo: Dave Allen, NIWA]

While New Zealand's economy will face many challenges because of climate change, there are also opportunities to do things differently to ensure a positive future.

For instance, as the country warms, high value crops that are normally grown in warmer climates, like avocados, may be able to be grown in new areas of the country.

We may see new landscapes emerge. For example, as the Tasman Glacier on the West Coast has retreated, it has created a glacial lake and some businesses now run boat tours to give the public a unique view of the lake.

Lots of actions aimed at reducing or adapting to climate change offer other benefits too—they might also make us healthier, save us money, make our towns and cities easier to get around, and help to clean up our environment for us and our whānau, as well as future generations, to enjoy.