Methane makes up the majority of these emissions and comes from farmed livestock, such as sheep and cattle. These animals naturally produce methane as a by-product of their digestive process and release it into the air – primarily through burping.

Nitrous oxide is produced when nitrogen compounds in urine, manure and fertilisers are broken down by microbes in the soil and released into the atmosphere.

Above graphic: Ministry for the Environment (MfE)

Methane(CH4) occurs naturally in the environment as well as being released through human activities. It is the second most important greenhouse gas after carbon dioxide (CO2) that is produced by human activities.

While most manmade CO2 emissions come from industrial processes, such as fossil fuel burning, the majority of human-induced CH4 emissions come from agriculture (from livestock, rice cultivation and biomass burning – such as clearing land by burning vegetation).

Fossil fuel sources are also the second most important manmade source of methane to the atmosphere. Above graph: Ministry for the Environment (MfE)

You might also like to check out the Ministry for the Environment’s interactive greenhouse gas emissions tracker.

The problem with methane

These different effects of greenhouse gases on the atmosphere are described as their ‘global warming potential'.

Despite being short-lived, methane is around 30 times more effective at trapping heat in the atmosphere than CO2, making methane a powerful greenhouse gas. Releasing one tonne of methane into the atmosphere would create the same amount of warming as 30 tonnes of CO2 over 100 years.

Read more about the Global Warming Potentials of greenhouse gases.

As the human population has grown, the number of farmed animals has increased significantly to meet the demand for food through meat and dairy products, as well as other products such as leather and wool fibre. In turn, atmospheric methane levels have noticeably increased over this period. In fact, it is estimated atmospheric methane levels have risen by more than 150 percent since the 1700s.

NIWA has been measuring the concentrations of methane in the atmosphere at its atmospheric monitoring site at Baring Head near Wellington since 1989.

The graph below shows the rise of atmospheric methane since this time. 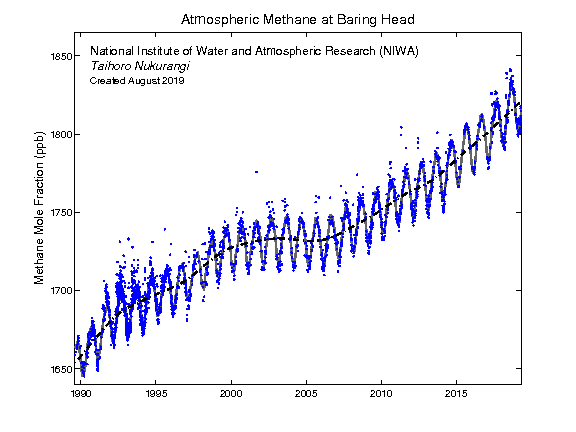 Several techniques have been developed to measure greenhouse gas emissions from agriculture.

Some of these include:

Many farmers have already begun to make changes to the way they farm to help lower agricultural greenhouse gas emissions, alongside efforts to adapt to the changing climate. Most of the ways these emissions can be reduced come down to having good farming practices in place to farm more efficiently. Options to reduce emissions can include:

The more an animal eats, the more greenhouse gases it produces. Controlling how much and what type of feed livestock eat can help to reduce emissions. Different plant types have different impacts on the amount of methane produced by an animal due to the different chemical makeup of each plant type.

Reducing nitrogen use and loss

Planting trees can help farmers to offset their greenhouse gas emissions. Trees store carbon as they grow and in doing so remove it from the atmosphere.

Read more about what farmers can do to reduce emissions.

Lots of research is being done to find new options to help reduce agricultural greenhouse gas emissions. For instance, researchers are exploring: