The Heathcote River has a relatively small catchment area of ~103 km2 at the Ferrymead Bridge where the river discharges into the Avon-Heathcote Estuary (see map on right). The river is small (mean flow at Buxton Terrace of 1.28 m3/s) in its non tidal reaches, but it has a well sustained base flow which is fed from groundwater originating from rainfall on the plains portion of the catchment and recharge from the Waimakariri River. Much of the flood flow originates from the Port Hills, but during extreme events that overwhelm the capacity of the Henderson Basin flood detention area the plains portion of the catchment can add substantially to flood flows.

The Heathcote River was initially chosen for this study because it flowed through a low lying urban area that was vulnerable to flooding that is of concern to the Christchurch City Council. As the study area is urban it allowed the application of fragility algorithms to estimate flood damage. The Heathcote River is also tidal within the urban area which makes part of the catchment vulnerable to sea-level change and so it is suitable for a climate change study that also includes the effects of sea-level rise.

The Christchurch earthquake of 22 February has lifted the tidal portion of the Heathcote catchment by about 0.4 m and lowered the rest by 0.1-0.3 m. Thus, the reported inundation modelling (performed using pre-earthquake topographic and bathymetric data) should be interpreted with this in mind. Nevertheless, the methods used are quite applicable.

For this case study the effect of climate change on rainfall was estimated using the design event approach [see Tool 2.1.2], where extreme rainfall amounts are increased by a percentage per degree of warming. The rainfall depth was based on rainfall statistics provided by Griffiths et al. (2009) and the temporal pattern of rainfall was taken from an observed severe rainfall event. The simple screening approach outlined in MfE (2010) was used to calculate the effect of various climate scenarios on the design event.

The following table lists the tools associated with this case study and the location (Figures / Tables) of some of the key findings.

An impacts analysis using Riskscape (not reported in any of the Tools; using pre-earthquakes elevation data) showed that based on the projected changes to the Heathcote River flood peak and the resultant likely increases to inundated area (taking into account sea level rise) as described in the Tools in the above table, the estimated increase in replacement costs (2010 dollars) to flooded building contents is between NZ$114M (2090 mid-range scenario) and NZ$315M (2090 high range scenario). 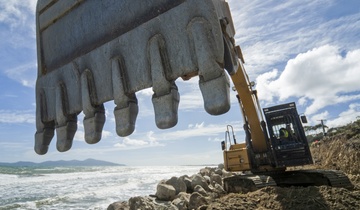