Drought* is generally defined as a severe moisture deficit below expected levels that restricts some type of activity (Wilhite et al. 2006). It is important not to confuse drought with related concepts like aridity where low rainfall is a permanent feature of the climatic environment, seasonality where water shortage is a normal part of the annual climatic regime, or desertification where a region of aridity shifts because of poor management (White and Walcott 2009).

Moving beyond this general definition of drought is problematic as it is a complex insidious event when contrasted to other natural phenomena (Wilhite et al. 2006; Hisdal and Tallasken 2000): it does not have clear entry, duration and termination points compared to floods, fires and storms. There are random properties of drought that do not lend themselves to standard analysis (Gordon 1992). Drought is 'context specific' as both its biophysical properties and physical impacts vary considerably between socioeconomic groups, regions and industries—it is possible that two adjacent farms experiencing the same climatic drought conditions will be experiencing different economic impacts.

As a result defining and quantifying drought is a research field in its own right, and there are many alternative definitions. Despite this diversity, two general frameworks are identified here as a way of understanding the numerous drought definitions, which lead to the methods of quantifying drought. The first and more widespread framework defines drought as a natural hazard. This is based on the notion that precipitation deficit leads to a water shortage and subsequent negative impact on an activity, group or environmental process (White and Walcott 2009, Wilhite 2000). The second framework examines drought as a risk that can be managed (White and Walcott 2009). This is based on the assumption that the impacts of drought can be reduced or avoided by taking actions, or that systems have an inherent resilience that can be adjusted.

Drought as a natural hazard

Research viewing drought as a natural hazard supports responses that manage the event during its occurrence, thereby alleviating and or repairing damage and loss. Examples include the formation of regional drought committees; the provision of income and other forms of support to farmers during a drought; and in some countries the alleviation of food shortages in the broader community. Best practice in this approach relies on: establishing planned and funded responses well before the drought event occurs; the use of well targeted drought indicators as an early warning system that guide the timely implementation of these responses; and ongoing monitoring to promote an early recovery.

The widely cited work of Wilhite (2000) on defining drought draws heavily on the view that droughts are a natural hazard. This stratifies drought definitions and indicators into a series of general categories:

Drought as a manageable risk

Defining drought as a manageable risk supports the identification of vulnerability and improvement of drought resilience. In agriculture, this is achieved by adopting a more holistic systems view of farming leading to transformational changes such as: shifts to the intensity of management; new or alternative production systems more appropriate to the climatic variability of a given region; and business restructuring to adapt to the dual risk of price and climate variability. Figure 1 (on the right of this page) is an example of how drought can be viewed as a manageable risk (White and Walcott, 2009). Here meteorological droughts are considered causes or drivers of hydrological processes like the soil water balance. The functioning of these processes gives rise to drought biophysical impacts like lack of irrigation water, loss of pasture growth and animal condition. In turn these biophysical impacts give rise to set of socio-economic drought effects for example loss of production and reduction of farm income.

In an agricultural landscape the meteorological causes of drought are increasingly modified by management as processes, as impacts and production outputs and outcomes are considered. This is illustrated by the blue arrows in Figure 1 which illustrates that an average climatic season could end up producing an above or below average farm income depending upon management practices. If a system is resilient to drought, climatic inputs lower than 30% of historical range might yield a farm cash income of 50% or greater than historical returns. The red arrow is indicative of a drought that cannot be managed; suggesting that a meteorological threshold exists below which management actions cannot mitigate negative impacts.

The presence and quantification of such climatic thresholds and their relationship with management is a key uncertainty when defining and assessing drought (White and Walcott 2009). Similarly, drought risk management is difficult to define because it is context specific: it is a management process that is highly situation dependant and evolves over time given the almost unique climatic and financial pressures experienced during each drought event (Clark, 2001). It is possible to build illustrative examples (typologies) of the type of management options that are available, but it is difficult to be specific and prescriptive without real context. Some example typologies include:

Drought indicators provide an objective basis for quantification and analysis of drought, and can be a source of information in both of the main frameworks used to define drought. Importantly the selection of specific indicators and degree of integration are different between the two frameworks described above. The hazard definition usually relies on one or two universal or generic drought indicators specific to a given response, for example meteorological or soil moisture metrics, whereas with the manageable risk framework, multiple indicators are used highlighting climate inputs, biophysical function and outputs.

The literature documents a large and diverse range of drought indicators that have been developed over the past twenty years. A review by Steinemann (2005, cited in Steinemann and Cavalcanti, 2006) identified 150 different drought indicators, noting that this may not be a comprehensive list. A key insight common in this body of work is that there is no universally accepted drought indicator, and they need to be developed for a specific context, are suited to different purposes and are motivated for a variety of reasons.

A degree of pragmatism is required in selecting indicators as data quality and availability, the timeliness of information and the nature of supporting models influence choice. For this reason, and because they are the leading expressions of drought in the landscape, meteorological indicators are the most widely used. Many countries, such as New Zealand, have well established near real time climate monitoring networks that provide a rich source of current and long term historical data (White and Walcott 2009). An increasing number also have the modelling infrastructure needed to produce derived agronomic indicators like simulated soil water and crop yields.

Rainfall based indicators provide a practical, general index because rainfall is the dominant driver of drought for many industries and natural systems. The WMO has adopted the Standardised Precipitation Index (SPI) as its universal drought indicator; and Rainfall Deciles (RD) have been used under Australia's National Drought Policy as a leading indicator to 'trigger' a more detailed appraisal of agronomic and socio economic impacts.

However, indicators based on soil moisture are usually considered more relevant as a general drought indicator for agriculture because they account for rainfall effectiveness. Examples include the Potential Evapotranspiration Deficit (PED) and the Soil Moisture Deficit (SMD). Ideally soil moisture based indicators should be derived with monitored field data, but this is not always practical or possible. For instance New Zealand is one of the few countries which has a national soil moisture monitoring network (see Figure 2 on right) but the data set is not yet comprehensive enough to build national level drought indicators for a full climate period (20-30 years). Hence, for New Zealand (and many other countries), the soil moisture based drought indicators are derived from a simulated water balance driven by climate observations.

Other candidate indicators (not used here) are the:

* The above text was extracted from Clark et al. (2011), Scenarios of Regional Drought under Climate Change, Chapter 4, p43-50.

White D.H.; Walcott J.J. (2009). The role of seasonal indices in monitoring and assessing agricultural and other droughts: a review. Crop and Pasture Science, 60: 599-616. 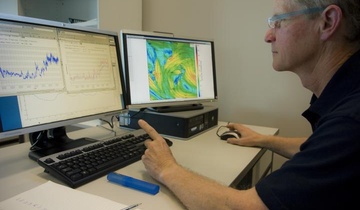 NIWAFarmMet - staying one step ahead of weather and climate