The United Nations Educational, Scientific and Cultural Organization (UNESCO) have proclaimed 2016 as the Aristotle Anniversary Year. This year is the 2400th  anniversary of the birth of Aristotle, a philosopher and scientist (384 BCE), who among other many great achievements was the first person to describe the structure, ecology, and diversity of sea urchins – way back in the 4th century BC. The sea urchin feeding apparatus, more commonly known as “Aristotle’s lantern” is an iconic masterpiece of evolutionary development, made up of as many as 40 separate calcite elements, and a key reason for the success of the Echinoidea over the 450 million years since they first appeared. However it is now believed that the early zoologists who adopted this term for the sea urchin mouthparts actually misread Aristotle’s writings. When Aristotle wrote of the resemblance between these creatures and lanterns it is more likely that he really meant the whole animal and not just the mouthparts.

Evidence for this comes from the excavation of perforated bronze lanterns from the region and time that Aristotle lived in northern Greece, and from confusion between the Greek words stoma (mouth) and soma (body) in Aristotle’s ancient texts. An Aristotle’s Lantern from a deepsea Tam ‘o’ shanter urchin

Nevertheless, the term is here to stay. The Aristotle’s lantern pictured below is from a species of Sperosoma, the genus with the largest of all the echinoids, Sperosoma giganteum A. Agassiz & H.L. Clark, 1907. An Aristotle’s lantern – the feeding apparatus of the deep sea Tam ‘o’ Shanter urchin Sperosoma. The top photo is looking down at the sharp teeth of the urchin, and the bottom photo is looking through the bottom of the whole jaw structure back towards the direction of the teeth. [Sadie Mills, NIWA]

Our friend over at the Echinoblog has written more about what sea urchins eat and how they use their Aristotle’s lantern:

What and how do sea urchins eat

Below is an image of what Sperosoma looks like on the seafloor. This was taken by our deep towed imaging system (DTIS) camera on a Graveyard Seamounts voyage in 2009. Sperosoma at home on a seamount near the Chatham Rise at approximately 1000 m deep. The red lasers in the bottom of the image are 20 cm apart. [DTIS camera, NIWA Seamounts programme voyage TAN0905] 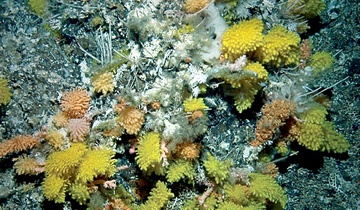