We would probably be grumpy too if we didn’t have any eyes, however, in the deep sea, where there is very little light (apart from bioluminescence) many organisms have lost the ability to see altogether.

These include the blind vent crabs, the Bythograeidae. This small but interesting group is exclusively adapted to living around hot hydrothermal vents where they are among the top predators. We have our very own New Zealand endemic species which is so far only known from a small number of active undersea volcanoes on the Kermadec volcanic ridge that runs between New Zealand and Tonga. Gandalfus puia was described by our colleague Colin McLay from Canterbury University in Christchurch (McLay 2007). He also erected the genus, with reference to the Gandalf character in the Lord of the Rings saga, which of course had been filmed in New Zealand. The species name ‘puia’ is derived from the Maori word for volcano or geothermal spring.

This short video describes hydrothermal vents and the animals that live on them (keep an eye out for the vent crab): The Depths Below - Life on a Vent.

This family of crabs is endemic to deep-sea hydrothermal vents and represent one of the most successful groups of macroinvertebrates that have colonized this extreme environment. There are currently 15 species in six genera and they are known along the mid-ocean ridges of the Atlantic, the Indian and Pacific Oceans and across a wide range of depths from around 240 m to more than 3600m.

If you are interested in vent fauna, the Handbook of Deep-Sea Hydrothermal Vent Fauna published in 2006 by Desbruyères et al is a great source of information and available for download  here. Vent mussels (Gigantidas gladius, see CotW 79) and vent starfish Sclerasterias (originally named Rumbleaster after this seamount) observed around the active hydrothermal vents around the summit of Rumble 5 during the Ring of Fire Expedition conducted by the American research vessel Ka-imikai-o-Kanaloa (KOK) and the submersible Pisces V. Is that perhaps a Gandalfus off the side (in the circle)?  Photo credit: joint New Zealand-USA 2005 NOAA Ring of Fire Expedition 2005. 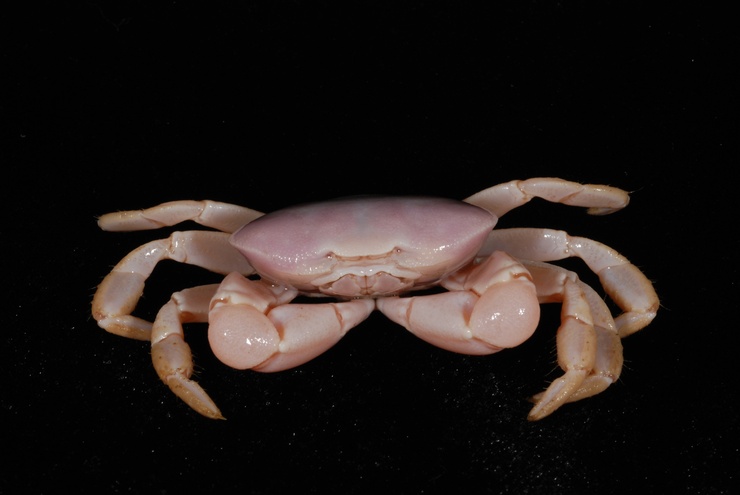 A specimen of Gandalfus puia collected from around 400 meters on the summit of Rumble 5 seamount on the Kermadec volcanic arc. The carapace of the specimen is about 3 centimetres across. Credit: Rob Stewart NIWA/ NIRVANA voyage TAN1213