We look at NIWA’s latest aquaculture success story and the new opportunities it’s on path to deliver.

In her Trip Advisor review of an Auckland eatery, Debbie proclaimed the Ruakaka kingfish to be the best dish she had ever eaten at a restaurant “anywhere in the world”

In a separate entry, Chris and his three friends also voted the Ruakaka kingfish sashimi their highlight. “It was divine,” he wrote.

Others followed in universal agreement.

“Everything was amazing – especially the Ruakaka kingfish… the kingfish was so yummy we ordered another one… highly recommend the kingfish sashimi...”

A memorable meal is one thing, but if they knew how many years and how much expertise and sheer hard work had gone into getting those kingfish slivers to their plates, Debbie and her colleagues might have been tempted to double down on the superlatives. Every week about 250kg of premium kingfish farmed in tanks at NIWA’s Northland Marine Research Centre (NMRC) at Ruakaka is carefully harvested and sent to a select number of restaurants around the country.

It is a deliberately small operation designed to test the market and provide valuable insight into the viability of a much larger one.

That larger operation is now on its way. Development has started on a recirculating aquaculture system (RAS) at the NMRC that can produce up to 600 tonnes of Ruakaka kingfish per year. It is a sustainable, land-based venture that aims to prove the technical and economic feasibility of farming kingfish in tanks at commercial scale.

NIWA, Northland Regional Council and the Provincial Growth Fund are all investing in this prototype. Success will lead to further commercial opportunities with a full-scale 3000-tonne operation up and running within five years and creating about 75 new jobs for the region. Regional Economic Development Minister Shane Jones calls the plan the type of innovation the Provincial Growth Fund wants to invest in.

“It is testing technology that could bring major sustainable economic growth not only to Northland, but the rest of the country.” The story of how Ruakaka kingfish is now poised to become a premium product on the menus of restaurants both here and overseas is one where scientific discovery and commercial reality are neatly intertwined.

Scientific discovery relies on the expertise and innovation of scientists. But with aquaculture research, that scientific enquiry is also firmly shaped by the end-game – overcoming the challenges and risks that will be faced by a commercial operation.

NIWA established the NMRC at Ruakaka in 2002 with a focus on researching the potential for aquaculture of high-value species.

“We deliberately wanted to turn that on its head at the NMRC. We chose just two species with market appeal – kingfish and hāpuku – and we concentrated on research at scale and on overcoming the hurdles to commercial uptake.”

In 2005, Dr Andrew Forsythe arrived at Bream Bay fresh from the Canadian salmon industry to take up the role as NIWA’s Chief Scientist – Aquaculture.

Andrew agrees that keeping scale and commerce front of mind has been the key to the NMRC’s success.

“Kiwi scientists can figure out how to grow almost anything, but there is no point unless the species can be reliably produced in a form and at a price that consumers will buy. Scale is a critical factor when controlling the cost of production.” So, as scientists developed the techniques that would enable NIWA to have almost complete control over the kingfish reproductive cycle, Andrew says there was a parallel workstream looking at how to apply that knowledge to a commercial proposition.

“I think the NIWA senior managers over the years deserve a lot of credit for recognising this was not a simple science question – it was a continuum of work.”

As with any primary production venture, successful farming of fish requires good genetics, good husbandry and good food. These three factors are the focus of ongoing research at the NMRC.

Equally important, however, the production system also had to align with NIWA’s product vision of ‘a high-quality healthy food sold in premium markets because of its exquisite taste, provenance and environmental credentials’.

“When we looked at the usual sea-cage farming of fish we weren’t confident that these principles could always be met without some radical re-invention, primarily because of the lack of control over the production system,” says Andrew.

Access to coastal sea-space was also becoming increasingly difficult, and that helped prompt a shift in thinking from sea-based farming to land-based alternatives.

“Five years ago no one would have said ‘let’s do it on land’. “But the evolution in almost any production system – including aquaculture – is to give the farmer more control while minimising adverse effects, both on the environment and the stock being farmed.”

He says this is particularly important today, with increasing climate variability and growing consumer demand for products with verifiable environmental credentials.

“These evolving external drivers, when combined with technology advances, led us to thinking about taking kingfish from egg to market in a land-based recirculating system.”

A recirculating aquaculture system is a lot like an aquarium – just on a bigger scale. Between 95% and 99% of the water circulating in the system is treated and reused.

The reduction in water needed by recirculating systems brings many advantages: it allows the water to be filtered and temperature-regulated to exclude diseases and parasites and optimise growth rates.

The water being discharged can also be treated to reduce environmental impacts – a key advantage over sea-cage farming.

The end results are impressive.

Andrew says the team can now order 20 million eggs in six months’ time and know exactly how many fish to put in a tank to get them. They also know what light pattern to use and the amount and type of feed to add so they can collect the eggs on the day they specify.

For a commercial aquaculture operation, that kind of certainty is gold. Andrew says while aquaculture has been expanding around the world to meet demand, the high-value, premium end of the market has been growing even more rapidly.

“Amberjacks, including our yellowtail kingfish, are globally popular fish in both western and Asian cuisine. Consumers also recognise the superior culinary attributes of the farmed product.”

“We’ve conducted product surveys with international chefs which confirm that Ruakaka kingfish is a premium product and in demand."

At the Taste of Auckland event in 2018 a dish of Ruakaka kingfish tartare, created by chef Cameron Knox of Mount Eden eatery Xoong, received the Best in Taste award.

Last year he followed that with a silver award in the Best Dish category.

Cameron is effusive about the product, saying its rich creaminess is something not present in wild kingfish.

“It’s incredibly versatile – you can serve it as sashimi, roast it, poach it, whatever you like. It’s super sweet with flavour, but maintains its delicacy. In my opinion, it’s the best fish in the country, hands down.” 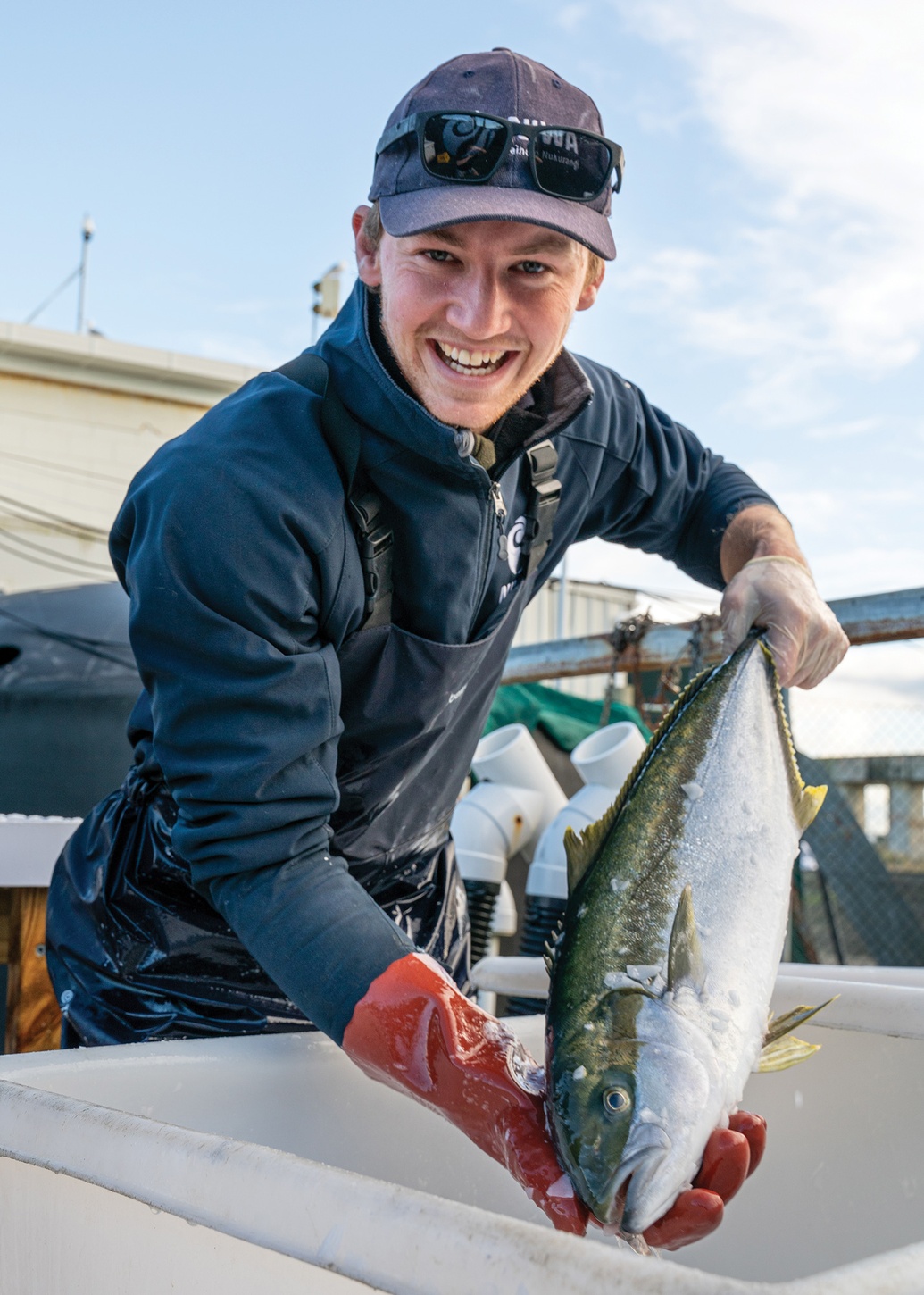 Expansion plans at Ruakaka are designed to show investors that there is an opportunity to develop a land-based kingfish industry in New Zealand, as well as the technology to develop land-based aquaculture of other species.

“All the feedback continues to tell us this is an exciting economic opportunity for the country,” says Andrew.

“The proliferation of Japanese cuisine has changed our perception of good quality seafood all over the world, and although we’re not targeting Japanese cuisine specifically, this is hugely significant.”

It’s hugely significant for Northland too, a region

that has a long history of economic struggle. Anchoring production at Ruakaka will not only generate local jobs, but also filter opportunity into a range of other regional businesses that will be required to service the facility.

Equally importantly, it’s a model which can be adopted in other locations and with other species, creating wider regional growth opportunities for Northland and elsewhere.

Bryce acknowledges that building a successful land-based aquaculture operation has been a long haul, but he’s very enthusiastic about what lies ahead.

“None of this would have been possible without the foresight of our directors over the years and the continued support by MBIE, Northland Regional Council and many others.

“It’s about having the courage to invest and seeing the longer game.”

Each female releases hundreds of thousands of eggs into the water and these are inseminated by multiple males. Spawning happens between December and March, but can be manipulated.

At Ruakaka, where kingfish are farmed in a recirculating aquaculture system, the fertilised eggs are collected once they float to the surface of the tank. They are quality checked, disinfected and incubated.

Eggs hatch after two days and larvae are transferred to a nursery area four days later.

The developing larvae are initially fed tiny aquatic animals. After about three weeks they move to a special formulated diet.

The fingerlings are separated as they mature and transferred into larger tanks.

Individuals grow rapidly, weighing between 2.5kg and 4kg after a year, when they are ready to be harvested for market.

A small proportion are selected for future breeding. These fish are put on a broodstock diet, breeding three to four years later.