New Zealand in a warming world

Most scientists agree that the Earth’s climate is warming as a result of increasing greenhouse gases. But regional climate changes make it difficult to identify the effects in different parts of the world.

At the start of the 21st Century, the world appears to be a warmer place than at any time since the Dark Ages. For the Northern Hemisphere there is evidence that the 20th Century was the warmest of any century over the past 1,000 years. For the world as a whole, 1998 was probably the warmest year since the start of reliable records, and the 1990s the warmest decade. Over the past 100 years, the global average surface temperature has increased by about 0.6°C, and average sea level has risen by 0.1–0.2 m. Extremes of weather seem to be more common. In mid- and high latitudes of the Northern Hemisphere, cloud cover has increased and heavy rain occurs more often. At the same time, there have been decreases in snow cover, in annual duration of lake and river ice cover, in the frequency of very low temperature events, and in the daily temperature range. 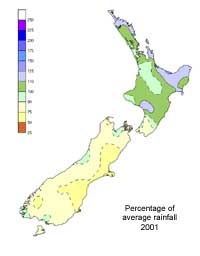 Most scientists agree that much of this warming and variability is a direct result of the rapid rise of carbon dioxide (CO2) and other greenhouse gases in the atmosphere due to increased emissions from human activities. They also agree that anthropogenic (human-induced) climate change will persist for many centuries. Since 1750 CO2 has risen by 31% to a level probably higher than at any time during the last 20 million years (see Water & Atmosphere 8(1): 14–16). Methane concentrations have risen by 151% (see Water & Atmosphere 9(1): 22). Computer simulations (see pages 10–11, this issue) show that the observed warming in the second half of the 20th Century could not have been caused solely by effects such as changes in solar radiation and volcanic activity. Increased concentrations of human-induced greenhouse gases were required to obtain warming consistent with observations. 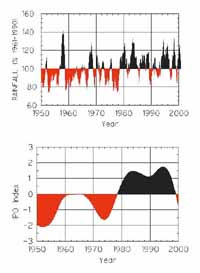 Rainfall on the west coast of New Zealand (top panel) shows large variations from year to year: generally El Niño years are wetter and La Niña years drier. An increase in the long-term mean rainfall appeared to occur at the end of the 1970s, at the same time as the Interdecadal Pacific Oscillation (IPO, time series shown in lower panel) changed phase. The recent reversal of the IPO in 1999 could have important consequences for west coast rainfall and hydroelectricity production over coming decades.

However, there is considerable debate about how much the climate will change in response to present and predicted greenhouse gas levels. The debate arises because the earth’s ocean and atmosphere influence the climate in ways that are often complicated, hard to measure and consequently not well understood.

The ocean and atmosphere make most of the Earth habitable by distributing the heat from the Tropics to the Poles. Although the atmosphere has a much bigger volume and moves much faster than the ocean, water holds much more heat than air. As a result, the ocean is as important as the atmosphere in transporting heat, each moving the equivalent of the output of several million power stations.

Such transfers of heat and moisture between the ocean and atmosphere can drive oscillations in the climate. The El Niño–Southern Oscillation (ENSO) is the best known, but others – such as the Interdecadal Pacific Oscillation (IPO) – can have considerable impact in New Zealand (see panel below). ENSO oscillates every three to seven years, driven by the interaction of sea-surface temperatures and winds along the equatorial Pacific. The IPO is also an ocean–atmosphere interaction, but appears to fluctuate at timescales of decades.

As well as transporting heat, the ocean plays another important role in the climate by absorbing or releasing gases to the atmosphere. In response to evaporation and cooling from the atmosphere, ocean waters in polar regions become cooler and saltier (i.e., denser) and sink to great depths. This sinking may remove carbon for long periods from contact with the atmosphere and biosphere. In addition, marine plants and animals take up or release dissolved carbon through photosynthesis or respiration. Some of the carbon is removed from the water as biologically formed particles sink.

Teachers: this article can be used for Physical World A.O 3 L7. See other curriculum connections at www.niwa.co.nz/pubs/wa/resources

These processes – and others – interact in determining conditions in the world’s ocean and atmosphere, now and in the future. New Zealand’s climate change will be part of the global response, but it will be strongly affected by regional variations in atmospheric and oceanic circulation. For example, mean atmospheric warming in New Zealand over the last 100 years matches worldwide trends, but mean rainfall since 1951 shows a west–east difference that has been attributed to very local influences of a sudden shift in circulation associated with the IPO (see graphs above).

It is important to appreciate that climate variations occur over a range of timescales. The changes caused by humans are likely to be long-term trends. However, such trends will be affected in the shorter term by natural fluctuations such as ENSO and IPO. Since 1977–78, at the time of the IPO shift, rainfall has increased by about 10% in the west and south of the South Island, and decreased in the east of the North Island, at the same time as the prevailing westerlies strengthened. However, this change, which is also consistent with the projected long-term anthropogenic trend, could well be reversed for a period of a decade or more by the most recent IPO shift, which appears to have occurred during 1999.

ENSO refers to a large-scale oscillation of the ocean–atmosphere system that is mainly seen in the tropical Pacific Ocean, but has worldwide effects. ENSO has a “normal” state with “warm” and “cold” departures known as El Niño and La Niña, respectively. During the normal state the trade winds, which blow on either side of the Equator, force the South Equatorial Current to flow east to west along the Equator. It is heated by the sun, making surface waters in the western Pacific the warmest on the planet.

During El Niños the trade winds weaken. The South Equatorial Current collapses, leading to warming in the eastern and cooling in the western equatorial Pacific. These sea-surface temperature changes lead to increases in the ocean–atmosphere heat flux in the east, and decreases in the west. This alters the atmospheric heat balance and changes wind patterns over the Pacific Ocean. These wind-field changes can often be felt at great distances from the Equator, and in New Zealand lead to more south-westerly winds. As a result, during El Niño periods New Zealand tends to be wetter than normal in the west and south, and drier than normal in the east and north. During La Niña, the opposite happens: the trade winds increase, with cooling of sea-surface temperature in the eastern Pacific and warming in the west.

Typically ENSO oscillates every three to seven years, with El Niño and La Niño often, but not always, alternating. Predicting the effects of ENSO events is not straightforward because they are very variable. For example the very strong 1982–83 El Niño was followed by a relatively weak El Niño in 1986–87.

Climate researchers have discovered that there may be longer timescale oscillations in the ocean–atmosphere system. These are manifest in a variety of climate indicators (such as 10-year variations in the frequency of cyclones) in both the Pacific and Atlantic.

One example is the IPO, which shifts climate every one to three decades. The IPO is strongest in the north Pacific centred near the dateline at 40°N, but appears to have an effect in the New Zealand region.

We don’t yet know what causes the IPO. Some climate simulation models produce IPO-like oscillations, although not always for the same reason.

Stephen Chiswell, Melissa Bowen and Brett Mullan are based at NIWA in Wellington.