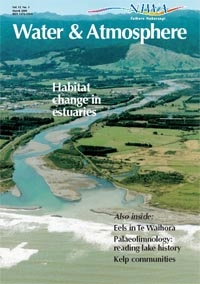 Clues about conditions in lakes are hidden in the lake sediments.

How have New Zealand lakes changed since European-style agricultural practices began in New Zealand? This is basic information needed by lake managers and researchers aiming to preserve or restore lake ecosystems. For most lakes, we don’t even know how they have changed over the past 5–10 years: only a few lakes have been monitored regularly for 5 years or more. So, imagine how valuable it would be to have information on lake condition that extends well back in time, perhaps hundreds or even thousands of years. Surprisingly, such information is being stored. You won’t find it in books, scientific papers or databases, but in the lakes themselves, in the sediments that accumulate within them.

Most lake organisms sink to the bottom of the lake when they die. Much of the dead matter rots and is recycled back into the food web. However, some organisms and other material are buried and preserved. A whole scientific discipline is devoted to retrieving these so- called “death assemblages” and using them to work out what the lake environment was like when the organisms were alive. This is palaeolimnology – the study of past lakes. 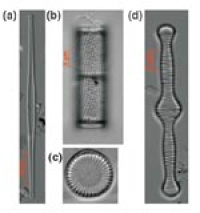 Palaeolimnologists examine many biological, chemical and physical indicators in sediment records. Among the most valuable indicators are diatoms – microscopic, single-celled algae that are extremely common in both freshwater and marine environments. The cell walls of diatoms are composed mainly of silica, which is readily preserved. Importantly, the silica skeletons of diatoms (known as frustules) are intricately and precisely shaped and patterned. Frustule structure is the primary basis for separating species. This means that it is as easy to identify the species of a preserved 1000-year-old frustule as it is to identify that of a living diatom. Using our knowledge of the ecological preferences of modern species, it is then possible to infer past conditions from the communities of fossil diatoms found in sediment cores extracted from the lake bed.

Although many diatom species found in New Zealand appear to have a worldwide distribution, we cannot be sure that diatoms that look the same as those from distant areas have the same ecological preferences. To overcome this problem, part of palaeolimnology involves surveying present-day diatom assemblages and lake conditions (such as pH and nutrient levels) within the region from which fossil records are to be examined. We can then use the results from this so-called calibration set to create models that estimate certain water quality measures from the diatoms present in a sample. The models are known as transfer functions. 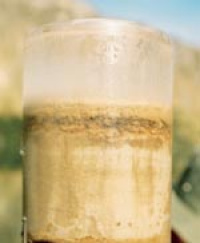 At NIWA we have recently developed a series of diatom-based transfer functions for inferring past conditions in New Zealand lakes, specifically nutrient concentrations, pH, salinity and productivity (measured as chlorophyll a, an estimate of the amount of live algae in the water).

Our calibration set included water quality data and diatom species data from 53 lakes across New Zealand. The diatoms were from surface sediment samples collected from the deepest part of each lake (up to 130 metres deep) and represent the most recent death assemblage. The distributions and abundances of diatom taxa across the 53 lakes were used to determine optimum values for each taxon for several water quality variables (see panel).

To assess the accuracy of the resulting transfer function we used a technique called cross-validation. The simplest form of cross-validation is the “leave-one-out” approach: the water quality variables for each lake are estimated from the diatom information using a calibration data set that excludes that lake. Predictions of water quality variables using leave-one-out cross-validation show that the transfer functions for our New Zealand lake dataset have good predictive power compared with published studies from elsewhere in the world.

Reconstructed chlorophyll a for the Lake Pupuke sediment record.

So how well does our transfer function work in reconstructing variables from fossil assemblages? One way to test this is to use information from lakes that have long-term measured water quality data and sediment that can be dated accurately. Such lakes are rare in New Zealand, but one that meets these criteria is Lake Pupuke on Auckland’s north shore. Blooms of nuisance algae were occurring in Lake Pupuke as early as the 1930s and very high productivity levels were recorded in the mid 1960s. The lake has been monitored sporadically since the mid 1970s and in recent times appears to have become less enriched. Radiometric dating of lake sediments (in a University of Auckland study led by Paul Augustinus) indicates that approximately one metre of sediment has been deposited in the centre of the lake over the last 200 years.

We examined diatom assemblages at 10 depths (representing intervals of around 20 years) in the upper 80 cm of sediments. The transfer functions derived from our calibration data set were then used to estimate concentrations of phosphorus and chlorophyll a.

The results show increases in nutrients and productivity between 1820 and the 1850s, suggesting changes occurred very soon after Auckland was settled. Further increases are also apparent after 1900 and again after the 1930s. Estimates for chlorophyll a peak in the samples from the mid 1950s and 1970s, and there are dramatic peaks in phosphorus in the mid 1950s. There is a general pattern of declining nutrients and productivity since the mid 1970s.

The comparison with the historical record is only general at this stage because the sediments were sampled at around 20-year intervals and regular monitoring only began in 1976. Nevertheless, our estimates follow broadly the same trends as the measured records. We have started work on sampling the sediments using a closer spacing to enable a more detailed comparison.

Overall, our diatom transfer functions appear to work well and provide the means to develop productivity records for any lake with a continuous and resolvable sediment record. Given the recent concerns over eutrophication in many New Zealand lakes, such records will provide invaluable information for researchers and managers seeking to identify baseline, pre-impact conditions and to monitor the timing and rate of change in lakes over long time scales.

Michael Reid is based at NIWA in Christchurch.

Transfer functions for estimating water quality or water chemistry from diatom assemblages are generally created through a process known as weighted averaging regression and calibration – WA. The underlying principal for WA transfer functions is that a given taxon will be most abundant under the conditions to which it is best suited, termed the optimum value for a variable.

To estimate the concentration of a variable from a fossil assemblage in a sediment core, we reverse the weighted averaging equations.

Jones, V.J.; Juggins, S. (1995). The construction of a diatom-based chlorophyll a transfer function and its application at three lakes on Signy Island (maritime Antarctic) subject to differing degrees of nutrient enrichment. Freshwater Biology 34(3): 433–445.