NIWA vessel RV Tangaroa visited Kaikōura in September 2017 to investigate the impacts of the earthquake in the coastal zone, which includes effects on rocky reef habitats and communities, pāua fishery and Hector’s dolphins.

Multibeam surveys of the Kaikōura Canyon both before and after the November 2016 Kaikōura earthquake have identified areas where submarine landslides have likely occured. New areas of slope instability and landslide-deposited materials have also been identified.

During this journey the seabed substrate and morpohology was surveyed, along with a series of biological and sediment core sampling. These will be studied in order to better understand the distribution and character of the submarine landslide materials and their impact on the coastal marine environment.

The course of RV Tangaroa is shown in the Google map below and was updated as the voyage progressed. The location of sediment core sampling sites are indicated by red star markers, along with the location of the Hikurangi Marine Reserve - purple shape. 19 September 2017
NIWA scientists have found signs of recovery in the Kaikōura Canyon seabed, 10 months after powerful submarine landslides triggered by the November earthquake wiped out organisms living in and on the seabed. 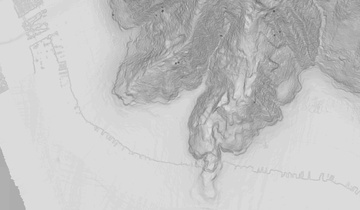 Huge mudslides from November’s earthquakes have wiped out all organisms living in the seabed of the Kaikōura Canyon.

In March 2017 NIWA scientists on board RV Ikatere surveyed the coastal area around Kaikoura for the first time since the November 2016 magnitude 7.8 earthquake. Their work has revealed significant changes to the sea floor.