RV Tangaroa completed its transit to the sampling site, CABLE BREAK WEST site, which lies at a depth of 1,920 m. This is the location of the international communications that broke during the eruption of the Hunga Tonga - Hunga Ha’apai volcano (HT-HH). The mechanism that caused this break is unknown.

The site was mapped using multibeam echo sounder. This data did not show any measurable difference between this survey and a previous survey in 2009. While there were no obvious seafloor morphological differences, this did rule out a submarine avalanche from either the slope by Tongatapu or another volcano immediately to the north of the cable route as a cause of the break.

The multibeam survey was followed by a deployment of the CTD and water sampling rosette. The DTIS was then towed across the line of the cable route. At first light on April 18th, the Tangaroa then transited closer to HT-HH for a multibeam and acoustic doppler current survey around the edifice. The initial circumnavigation of HT-HH, at ~1000 m bathymetric contour level indicated that most of the flanks of HT-HH have changed because of the eruption. The changes are erosional and depositional and are generally in the order of around 10 m, but there are notable “channels” running down the flanks were significant loss of material occurred. The largest so far is a channel running NW from the caldera where the seafloor has been scoured out to a depth of up to 60 m in places. Note, that this is only an indication from one circumnavigation of the multibeam. At first light on April 18th, the Tangaroa then transited to HT-HH for a multibeam and acoustic doppler current survey around the edifice. (NIWA-Nippon Foundation TESMaP / Rebekah Parsons-King) 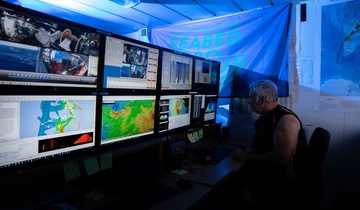 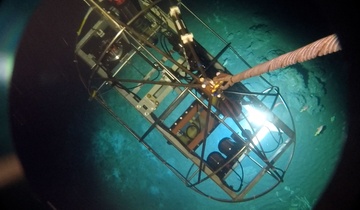