In the South Island, an area of drier than normal soil moisture encompasses Central Otago, Queenstown-Lakes, and interior Southland. As of Thursday 20th October, Queenstown’s dry spell reached 24 days, Wanaka 24 days, and Clyde 22 days. The dry spell in Queenstown is the longest since August-September 2014. Meanwhile, an area of wetter than normal soils extends from eastern Marlborough, through much of coastal Canterbury, and into north coastal Otago.

The only hotspot in the country is found in a small area of northern Central Otago and interior Waitaki.

A relatively active weather regime, typical of spring in New Zealand, is expected to continue over the next week. A series of fronts will move up the country, causing rain, with the highest totals expected in the west of both islands.

Across the North Island, scattered showers in the west and north on Friday, Saturday, and Sunday are forecast to total 5 mm or less each day. From Monday into Tuesday, a weak area of low pressure is expected to track from the subtropics and deliver 5 to 10 mm to the upper portion of the island to East Cape. Scattered showers in the west may total 5 mm each day. At this time, Wednesday looks primarily dry before another weak front delivers about 5 mm to western and northern areas from Thursday into Friday. Then, from Friday into Saturday, a stronger front may deliver some heavier rainfall totals to the island.

For the South Island, dry conditions are expected on Friday before a weak front tracks northward on Saturday. 5 mm of rain or less is expected in Southland, Otago, and Canterbury while up to 10 mm may fall across Fiordland and the West Coast. On Sunday and Monday, scattered showers are expected to bring only a couple of millimetres to the southern and eastern part of the island while rain persists along the West Coast, totalling 5 to 10 mm each day. Tuesday, scattered showers in the south and west of the island are forecast to total 5 mm or less. A steadier rain may then arrive in Fiordland and the West Coast on Wednesday with lighter rain stretching across the southern portion of the island. On Thursday, rainfall will be scattered about the western and southern part of the island and total 5 mm or less. On Friday, a stronger front may bring some heavier falls across the island, particularly in the west and north.

Over the next week, near normal amounts of rainfall for the time of year should prevent the development of any new hotspots. The small hotspot in Central Otago and Waitaki should remain about the same. Soil moisture anomaly map for 19 Oct 2017. This is relative to this time of year. 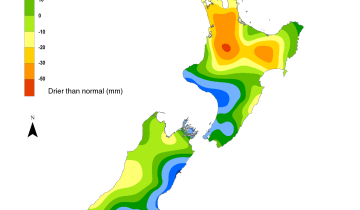 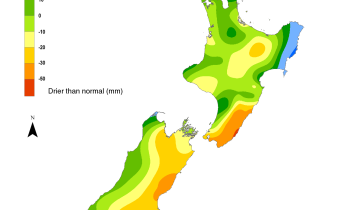