New Zealand faces a variety of hazards associated with snow.

These hazards can be categorized into the following two groups:

Snowfall can occur when there is precipitation – water in frozen or liquid form falling to the ground - in areas where the ambient temperature is near or below freezing. This is the usual situation for our alpine areas in winter, and can reach lower levels when there are outbreaks of cold southern air.

The potential impacts associated with snow are:

The relationship between the magnitude and frequency of snowfall is not yet well defined.

The spatial distribution of snow hazards are :

Influence of climate variability and change

Subject to the pace of global climate change over the coming decades, the extent, depth, duration and quality of snow in New Zealand is likely to be subject to significant changes. The magnitude of the change will depend of the emission scenario chosen, however the following change can be expected:

Since 1895 (the start of records), 39 snow events have been recorded which damaged property, infrastructure, livestock or resulted in human deaths.

NIWA scientists are involved with research into each of the main hazard areas associated with snow and avalanches. We collaborate with other New Zealand institutes such as Victoria University of Wellington, University of Otago, University of Canterbury and GNS Science.

Find our more about these impacts

More information on our snow and ice monitoring network 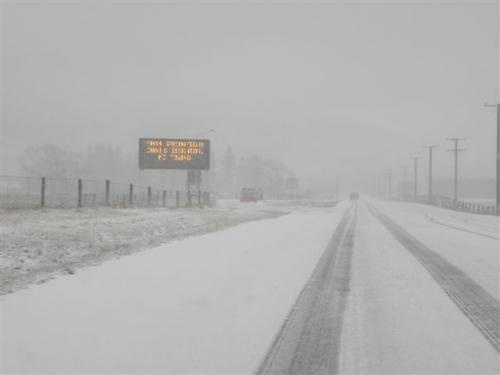 Snowy road just outside Springfield at 10 am on 31st May (courtesy of Margaret Woulfe, NIWA)