Effects of ocean acidification on plankton in New Zealand waters

Our oceans are expected to become more acidic as carbon dioxide concentrations rise. This will likely have impacts on the plankton, which play a major role in ocean ecosystems and processes.

This study will measure plankton diversity and productivity in New Zealand’s Exclusive Economic Zone (EEZ) and predict their response to ocean acidification, warming, and stratification.

In other parts of the world increases in atmospheric carbon dioxide (CO2) have been accompanied by increases in CO2 concentrations in the upper ocean and an associated increase in ocean acidity. The current rate of change in acidity and the predicted acidity for 2100 are outside the range experienced by the oceans for at least half a million years.

This rapid change is expected to affect the growth of plankton — particularly those that form carbonate shells, because increased ocean acidity reduces the availability of carbonate. Conversely, other phytoplankton groups, such as the nitrogen fixers, may respond positively to increased CO2. Studies from other regions indicate potential for significant changes in plankton species mix (diversity), distribution, and abundance as a result of acidification.

Such changes could have serious consequences for the productivity and functioning of marine ecosystems, as plankton play key roles in marine food chains and important processes such as carbon cycling, and influence atmospheric composition and climate.

New Zealand is ideally placed to study the effects of ocean acidification on both sub-tropical and sub-Antarctic waters, as it straddles both. However, there is little information on the distribution and abundance of plankton in New Zealand waters, or how they might respond to ocean acidification.

The study, which began in January 2009, will take place over five years to:

A baseline of plankton distribution and diversity

This goal will be achieved through regular ship-based sampling of plankton biomass and species composition in surface waters and analysis of plankton in sediment traps at 1500 m depth over 4.5 years. The sediment traps are sited at the two NIWA biophysical mooring sites.

The ship-based sampling will largely be carried out as part of two existing monitoring programmes:

The distribution of nitrogen-fixing bacteria, which might benefit from increased ocean CO2 concentration, will also be monitored in three separate voyages in warmer sub-tropical waters around northern New Zealand.

An algorithm developed to predict the distribution of coccolithiophores (a group of shelled phytoplankton that produce large blooms visible from space) from satellite data will be tested in New Zealand waters in two research voyages. The algorithm will then be applied to archives of satellite images, dating back to 1997, to produce an atlas of coccolithophore distribution in the New Zealand EEZ. It will also be used to predict future coccolithophore distribution under various ocean acidification and temperature scenarios.

Experiments on effects of acidicification

A new state-of-the-art manipulation facility is being developed by NIWA and Otago University to test the response of plankton to changes in CO2 concentrations, temperature, light, and nutrients. The facility will allow fine control of these parameters to test plankton response to multiple factors at realistic levels. Plankton will be exposed to CO2 concentrations corresponding to present day atmospheric levels, predicted 2100 levels, and three times present day levels. 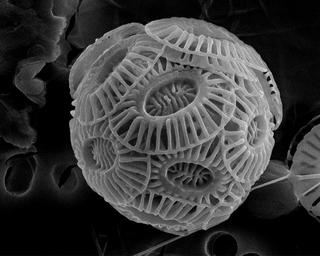