The Marine Environment Classification (MEC), a GIS-based environmental classification of the marine environment of the New Zealand region, is an ecosystem-based spatial framework designed for marine management purposes.

Developed by NIWA with support from the Ministry for the Environment (MfE), Department of Conservation and Ministry of Fisheries, and with contributions from several other stakeholders, the MEC provides a spatial framework for inventories of marine resources, environmental effects assessments, policy development and design of protected area networks.

Several spatially-explicit data layers describing the physical environment define the MEC. A physically-based classification was chosen because data on these physical variables were available or could be modelled, and because the pattern of the physical environment is a reasonable surrogate for biological pattern, particularly at larger spatial scales. Classes within the classification were defined using multivariate clustering methods. These produce hierarchal classifications that enable the user to delineate environmental variation at different levels of detail and associated spatial scales.

Large biological datasets were used to tune the classification, so that the physically-based classes maximised discrimination of variation in biological composition at various levels of classification detail. Thus, the MEC provides a general classification that is relevant to most groups of marine organisms (fishes, invertebrates and chlorophyll) and to ecologically important abiotic variables (e.g., temperature, nutrients).

The MEC has been published by MfE as datasets that are downloadable as well as viewable online:

An example of the MEC as a GIS layer in ARCView format is also available: A diver communes with snapper at Leigh Marine Reserve. If a snapper wants to grow old, found a NIWA study, it should stay put. Credit: Dave Hansford 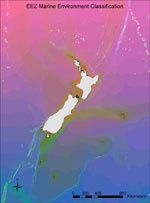