The invasive sea squirt, Styela clava, has been found in New Zealand.

This invasive sea squirt is known by many names

What are sea squirts?

Sea squirts are immobile marine invertebrates which extract food (plankton and organic material) from seawater pumped through a branchial sac in their body cavity. They are called sea squirts because they ’squirt' seawater.

The scientific name for this class of animals is Ascidiacea, so scientists often refer to them as 'ascidians'.

They are part of a wider grouping (sub-phylum) of marine invertebrates called 'tunicates'.

What are the key features of Styela clava?

Styela clava has a long, club-shaped body on a tough stalk. Its surface is tough, leathery, rumpled, and nobbly. They can be brownish-white, yellowish-brown, or reddish-brown. In sum: ugly brutes.

Scientists call Styela clava a ’solitary' sea squirt, which means that each individual has its own stalk and adheres separately to a substrate.

It is known to grow rapidly overseas, reaching densities of up to 500-1500 individuals per square metre. They can live for up to two years and grow up to 160 millimetres long.

Styela clava is a hermaphrodite, but you have to have more than one to reproduce because the male and female sex organs mature at different times to avoid self-fertilisation. They release eggs and sperm into the water, where eggs are fertilised. The resultant larvae can float freely for 1-3 days before settling and attaching themselves to a hard surface (e.g., rocks, wharf pylons, marine farm ropes).

Overseas studies have shown Styela clava to be reproductive throughout much of the year. It does not reproduce when the water temperature is below 15 degrees Celsius.

Styela clava lives in mostly in shallow seawater and can live in water as deep as 25 metres.

What damage does Styela clava do?

The sea squirt competes for space and food with native and aquaculture species (e.g., mussels, oysters).

It can also be a nuisance by fouling marine farming lines, vessel hulls, and other structures.

Where is Styela clava found around the world?

Styela clava is thought to be native to the northwest Pacific: Japan, Korea, Northern China, and Siberia.

It is known to have spread to parts of northwestern Europe, North America, and Australia (northern Tasmania; southern New South Wales and Victoria).

How does Styela clava spread?

Styela clava has probably spread round the world on ships' hulls and possibly on oysters transferred from one place to another.

For example, in 1953, Styela clava was found in Plymouth Devon, UK. This has been linked with the return of war ships there at the end of the Korean War in 1951.

Can Styela clava be controlled?

Hand removal (picking or scraping the organism from its point of attachment) is the most reliable control method, but this is obviously costly in terms of time and effort. Other ways of killing Styela clava involve lengthy exposure to air and/or extreme temperatures. Sprays and dips of high salt, hydrated lime, and acetic acid solutions have also been tried on tunicates.

Adult Styela have tough leathery bodies and may contain chemicals that deter predators. The tiny 1-3 day old juveniles are vulnerable to specialised predatory snails in some locations. There are reports of predation by certain fishes (wrasses) in the northeastern US. According to the UK Joint Nature Conservation Committee, the deliberate introduction of the common shore crab (Carcinus maenas) into cages surrounding the sea squirt was not successful as a control agent. 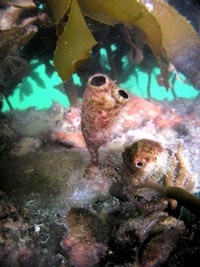